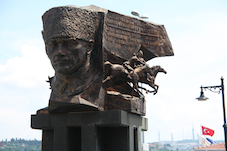 Yes, we are travelling to the Antipodes…as defined by the Macquarie being “the parts of the earth diametrically opposite each other”. So in this case Europe and Asia Minor, namely Turkey.

In this exercise, otherwise known as a holiday, we will stress ourselves to the max, dealing with the insanity of airports, border controls, foreign languages, strange customs, being confined in flying silver cigar tubes in spaces barely large enough for a 10 year old child, public transport we can’t decipher, unable to speak to 99% of the local inhabitants and generally in a constant state of stress as we try to avoid losing our passports, luggage, cameras, wallets etc. All good though because it’s a holiday.

We start at some un-Godly hour of the morning because (a) Kaylee chooses to inhabit one of the most remote parts of the planet known to human-kind from which you can only reach an airport after a trip about half as long as that from Melbourne to Turkey and, (b) , this is compounded by her last minute decision to search every known luggage shop from Tallangatta to Melbourne in an effort to find the world’s lightest suitcase – which also turns out to be the world’s most expensive piece of extruded plastic. It’s one of the contradictions of our society that they less you get (lightest, smallest, least material, least human labour) the more expensive it will be.

I have my own special contribution to travel stress. It’s called the bag with many pockets. To this IÂ add the clothes with multiples pockets and more layers than mille feuille. This means at any given time during my travels I have more than 20 different places in which I can potentially have put any item of value.

I have never managed to allocate any specific pocket for any specific purpose which means that on any one of the 46 times per day when you need to look for one of 26 key items Â without being able to find it/them this leads to panic stress of 20 x 46 x 26 stressful moments per day. Or 23,920 moments of daily panic. Or it would, except that having done this so many times, I always know that I will find my password slipped under the insole of my least used shoe at the bottom of my bag just before they decide to close passport control for the night. This annoys the shit out of Kaylee who tends to panic if she hasn’t got to the departure gate at least five hours before they first call her flight.

Arriving at Melbourne Airport we start the normal process of security farce. Every few months our great security services in some part of the “western” world test baggage security services. “We” invest hundreds of millions of dollars of our money in anti-terrorism in order toÂ protect ourselves from a Labor victory at the next election. It goes like this: DGSE (France), DIO (Australia), MAD (MilitÃ¤rischer Abschirmdienst- Germany), DIA (US) or one of the other myriad agencies tries to smuggle items Â through security at any given airport. In around 90% of cases they succeed.

Baggage Security Officer: “What is that you have in your hand luggage, Sir/Madam?”

Baggage Security Officer: “Is it a liquid or gel, Sir, in which case it should be a plastic bag”

Despite everyone knowing that almost all baggage and other security screening is a complete waste of time and money our Governments continue to invest millions in it for, apparently, the sole purpose of annoying the shit out of all of us and making airports even worse than they used to be.

Our flight to Bangkok on Thai is uneventful. We arrive at the “new” Thai international airport,Â Suvarnabhumi, which opened in 2006. Â Despite being relatively new it looks and feels like something out of the 1960s Soviet era. A massive mausoleum it paysÂ tribute to the Thailand’s obsession withÂ concrete. Half finished in many areas, falling apart in others, it is dominated by massive beams and tunnels with walls of concrete, Â with no redeeming features, little signage, nowhere to sit, bad cafes and the ubiquitous duty free. It’s hard to believe that anything so new and expensive could be so awful and one wonders how much money was siphoned off into the pockets of corrupt officials?

In its awfulness it is typical of the schizophrenia of Thai society. A “friendly” Bhuddist society that is anything but Bhuddist in its attitudes, can be unfriendly to the point of fear, has a culture that in theory worships nature but does everything possible to obliterate most it, a religion that is supposed to be peaceful and non-materialistic but where the military dominates every aspect of life and where society is anything but peaceful and is highly materialistic. So just as hypocritical asÂ most Christian societies in fact.

Next: Istanbul: across the European and Asian divide…riots, Ramadan and revolution…