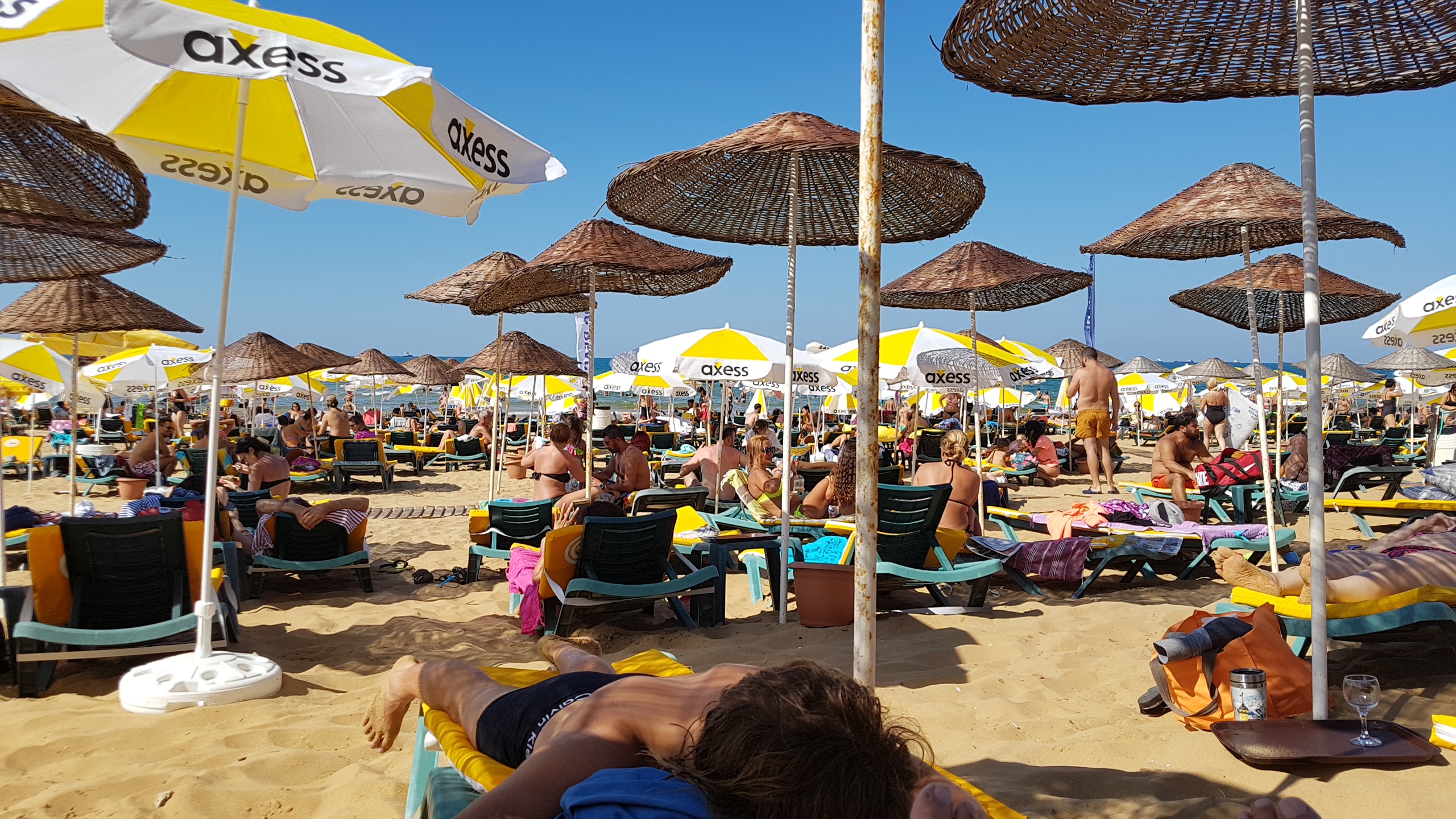 As an Australian there are few more bizarre experiences than visiting a popular European beach. Yes, there are remote(ish) beaches in Europe and beaches with surf. Some of the Atlantic beaches of France meet these criteria. But if you want a cultural experience utterly foreign to the average Australian then accept an invitation to a popular city beach or swimming spot near a major population.

This is, to the average Australian beachgoer, as instant coffee is to the Australian coffee snob or as a British national park is to an Australian wilderness area.

The key to the experience is to take every single thing one might expect from Australian beaches and invert it. Space, solitude, waves, free access, freedom, quiet, nature, walking, wind. None of these are on offer. In essence the aim is to take the urban experience and transfer it to the coast adding just one thing, saltwater.

European Beaches: no solitude, no waves, no space, no nature

We leave Istanbul at 10 am. This is the first difference. Almost nothing starts early on a weekend in Europe, whereas for me the one of the joys of the beach is the early morning light and solitude. It’s forty minutes to the Black Sea, if one is lucky. If the traffic is bad it can take 90 minutes. But no one who lives in Istanbul would really care, since it can take two hours to travel 5 kilometres, along the Bosphorus, on a bad day.

The aim of the urban European beach experience, it seems, is to remove almost any element of the natural. If you can concrete it, do so. An urban shopping experience, at the beach is one element, through the creation of a food court on the beach, among other things. Removal of any risk is essential. Avoidance of quiet is a critical element.

The louder, the more populated, the less natural and the more urban the better. Even better have motorised hang gliders pass over every ten minutes. If humanly possible, offset the unpleasant natural hum of the ocean with regular passing jet skis. If they happen to mow down the occasional swimmer to provide some light entertainment so much the better. One less person with whom to fight over the beach lounges.

As you approach the beach you can hear the bass from about a kilometre away. It sounds more like the average Byron Bay doof than a beach. We park and follow a stream of beachgoers, longer than the average airport security queue, down to the beach entrance.

The first impression does not lie because, while the beach is technically public, somehow private companies are allowed to control most of the beach and charge for entry. To ensure this, fences and security guards are employed. They are not employed to keep you and I safe from imminent terrorist threat. Instead they are charged with  keeping the food and drink franchisees safe from economic terrorists who might undermine their economic security by bringing bottled water or food onto the beach. 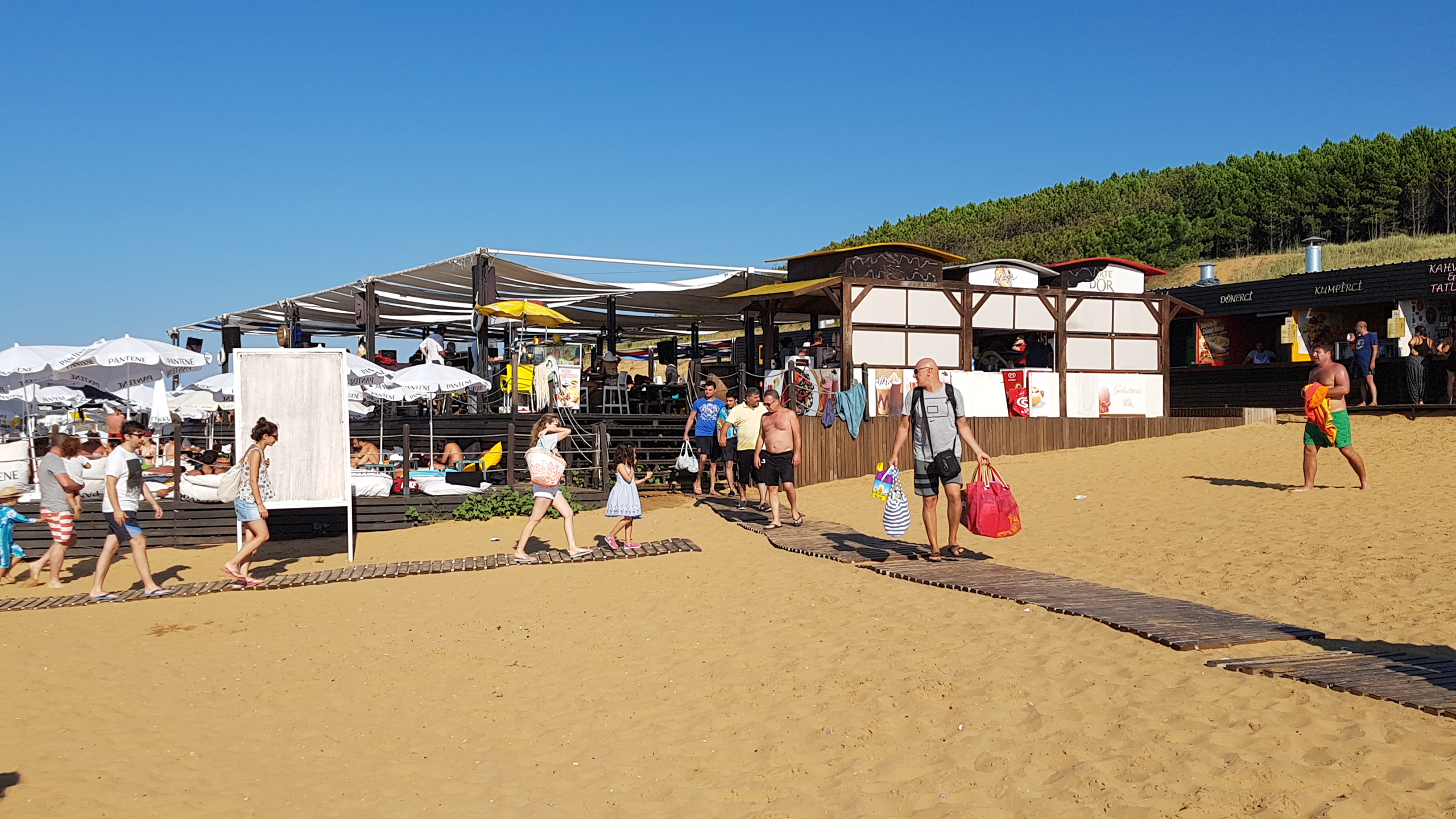 And every beach shall have multiple cafes, bars, boom boxes and dance floors cos that’s what beaches are for

Once our contraband (water) has been confiscated we are allowed onto the sacred shore. Here, for our $10 entry fee we can fight with the hoi polloi for our share of the beach furniture. With the advent of climate change it’s about 45ºc in the shade, so an umbrella is essential.

We haven’t arrived early but, fortunately, manage to find four of the five remaining beach chairs. These are vacant because because they are immediately adjacent to the largest of the beach loudspeakers. This ensures that not only can we not hear the ocean but we can’t hear each other either.

Since we cannot talk to each other, this leaves the sole remaining, non-swimming, forms of entertainment as reading and trying to re-position one’s beach umbrella to keep in the shade as the planet revolves.

Access to the beach, which remains forty metres away, is complex since it involves passing through a teeming maze of people and beach furniture (assuming furniture can teem) apparently set up to prevent any direct route to the water. If you weren’t hot before you left your seat you are by the time you reach the water.

This is partly because you have fried your feet on the white hot sand, having failed to bring any water tolerant footwear, and partly because fighting through the crowd to actually get at the water is more difficult and sweat inducing than being first at a bargain bin at a Boxing Day sale.

Once at the water, the nanny-state regulations Australia look like a paradise of risk taking. Technically you are not supposed to go outside the restricted (buoyed) area in case you (a) drown or (b) get your head taken off by passing high speed boats/jet skis or (c) get run down by a supertanker heading for the Bosphorus.

As a result you can’t actually get more than waist deep because the water depth in the Black Sea increases by about 1 centimetre for each 20 metres that you head out to sea. So you are halfway to the Ukraine before you are neck deep.

Nevertheless I take my life in my hands and, abandoning all hope of rescue should I start drowning, I head out into the 15 centimetre surf. Once I am chest deep, and thus outside the marked area, I am subjected to numerous and repeated urgings from both the onshore lifeguards, in their tower, and the surf patrol on their board to save myself from imminent death by returning to the safety of the buoyed area.

However being blond/grey haired and light eyed I am able to ignore their urgings by posing as an idiot tourist, shrugging and waving my hands about. Hopefully they think I am a north-Italian since we wouldn’t want the Turks to think badly of Australians.

Beware of rips and do not swim outside the rubber duckies, due to dangerous, large, surf

Despite both the costs and risks of visiting the Black Sea, we nevertheless pass a pleasantly indolent day doing nothing. I finish several chapters of my book Birds without Wings an epic of Turkey’s years between the 1880s and 1930s. Judging by the number of slaughters of Greeks, Turks, Armenians, Kurds etc etc, it is a wonder that anyone at all survives in Anatolia and its surrounds.

Our day at the Black Sea follows on from our sailing trip with a local group from InterNations. Had this been a commercial trip it would arguably have fallen foul of the Trade Practices Act.

Sailing, Turkish style. Put down the anchor and do nothing

Nevertheless this form of stationary sailing trip has the great advantage that (a) no one gets seasick (well one person only) and (b) we don’t have to put up with a diesel motor all day. Like the trip to the Black Sea, the sailing trip allows our group to indulge the Turkish passion for socialising, lying in the sun getting skin cancer, eating, music, dancing and swimming.

Despite the unforeseen passing of a sedentary day on the ocean waves, a pleasant, albeit overlong, day of doing nothing is enjoyed by everyone. It allows everyone to drink too much, eat well, keep cool with repeated swims and for the men to regress to being ten year olds. They do this by repeatedly jumping off the highest part of the boat much to the apparent pleasure of the women watching them from the water, who encourage the regression to adolescence.

As the day wears on the music becomes progressively louder and eventually the crew manages to persuade the increasing inebriated passengers to commence dancing, an invitation to make fools of ourselves. This invitation is stubbornly resisted by Kaylee, her nephew, Jesse, and I who all require substantially more alcohol before we can be persuaded to overcome our inherent northern caucasian inhibitions. After all one wouldn’t want to enjoy oneself too much.

As evening falls we fire up the diesel for our return to Istanbul a trip which is leavened by the entertainment of a typical day in Istanbul traffic but transferred to the water . This where our skipper decides that he has been offended by another boat which has failed to give way, as required.

This allows us all the hilarity of witnessing a Mexican standoff where both boats come to a standstill mid-ocean while the two boat captains harangue each other for five minutes from a distance of 20 metres. Fortunately, not being the US, neither are armed so we all survive.

This post is the fifth and last in the series “Europe 2017, from Corsica to Bosnia”. Links to previous posts in the series are below:.

One thought on “Europe 2017 (Episode 5): The Black Sea, the Beach and the Bosphorus”