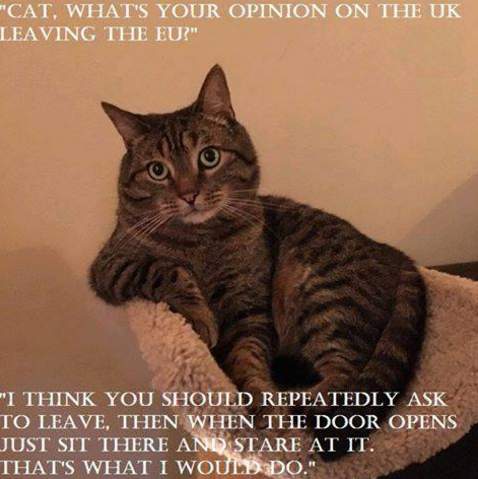 Of maddening Brits and madÂ families.

It was 1973. Britain had just joined the EU. Margaret Court had beaten Evonne Goolagong at Wimbledon, the Netherlands recognised East Germany and peace talks had resumed between the US and North Vietnam, the trial of the Watergate burglars had begun and Roe v Wade had legalised US abortions. For all of the 1970s Great Britain was referred to as the sick man of Europe. The so-called Empire ended in the 1950s though no one seems to have told the Brexiters. So before the UK joined the EU it was already not so great. But never mind let’s restore the non-greatness. Or so it goes.

I arrive in Britain three weeks before the referendum. Britain has three things on its mind, apparently. Brexit, England playing Australia at rugby union and the Euros (European soccer cup). There is no debate on anything substantive just an endless and mind-numbing succession of slogans which essentially amount to three things: (1) we need our independence back; aka â€“ how the fuck can we get rid of all these blacks/foreigners when the EU won’t let us (no one noticed that we have a global economy and national independence became a fiction about 20 years ago) (2) Let’s make the British economy strong again (just like pre-Europe in the 1960s and 70s â€“ good luck with that) and (3) Let’s make Britain Great again â€“ umm just like in 1850….

No one thought to consider the 4 million Europeans that prop up the British economy/health service/tourist industry, doing all the things that no Briton really wants to do. Or the 1.4 million Britons happily living in Europe. Never mind the hundreds of thousands (possibly millions taking into account multipliers) of jobs largely dependent on access to the EU trading block. Mere details. And the Scots? Off with you.

The more things change the more the stay the same. Little England is still little England for the voting majority. Never mind that only about 25% of young people voted. The coffee is still horrible, the rain still falls, the wind howls and Heathcliffe is still, no doubt, out there on the moors somewhere.

My arrival from Italy brings me to the UK just in time for my much loved aunt, Rosemary’s funeral. She died very suddenly from cancer only about 2-3 weeks after being diagnosed. It seems to be that time of life. The older generation are slowly dying. My Dad at 90, 12 years ago. On my mother, Lynette’s side first my uncle, Norman, in 2012 (Lynette’s sister’s husband) at 85 and now my aunt (Lynette’s brother’s wife) at 81. My Dad’s sister died last year at 95. Now of the immediate family only my Mum, her sister, Betty and brother, Willoughby remain of the previous generation. There are two cousins also remaining of that generation now all in their mid 80s (and a few more distant ones scattered around the world). Increasingly it seems like the end of an era. Now also our own generation, the flower of the Franklin years are dying. Lincoln Siliakus a year ago. Philip Toyne, Felicity Wishart more recently. Illness is more prevalent. Age shall undoubtedly weary us all.

A small consolation is that the funeral brings different parts of our far flung family together, about 60 in all, plus friends. In the face of Brexit our family is doing it’s best to resemble the United Nations. Apart from the English and Welsh, we have Dutch, Venezuelans, Brasilians, Americans, South Koreans, ring-in-Australians. And that’s just the known parts â€“ who knows what DNA would turn up?

One of the side-effects of these deaths is the emergence of hundreds of ancient family photos â€“ mostly completely unlabelled dating back to the 1850s and which have been stored in the cellar of Betty and Norman’s house. They finally emerged after Norman’s death and Betty’s decision to move house. The moral is, if your grandparents are still alive, comb the house for photos and ask them who each person is.

Nevertheless the photos prompt a flurry of genealogical research and I take Mum off to see the ancestral pile, near Monmouth, in Wales. Called Brynderi it once had 30 tenant farms. By the time my Great-grandfather owned it there were just three left. No one knows quite how or why it disappeared from the family but suspicion falls on the Great Depression. Once again the Conservatives’ fault. The view from the property is immense as are the gardens. Now it’s owned by a 90 year old, Mrs Hall, who has taken herself off to her beach property in Menorca with her new boyfriend, according to the tenants.

I also visit the former house of another former Great Grandfather, James Hurman. Once called Lullote it is now called Rosapenna. Knocking on the door, I ask to take some photos around the back. No worries. We chat a while and, bizarrely, it turns out that the woman’s maiden name is also Hurman. Again the family wealth, such as it was, has disappeared, who knows where. All sides of the family fell on (relatively) hard times going from being wealthy members of the local elite to just being well off members of the local elite.

Despite the incipient lunacy of Brexit and other similar character traits, on a fine day, the UK and Cardiff, in particular, can be quite stunning. Admittedly, since Cardiff has to be one of the wettest places in the entire UK, those days are few and far between. I am fortunate enough to enjoy ten days of almost uninterrupted sunshine and the company of my family including a very elderly mother, who at 88 insists of trying to re-shape the Welsh footpaths with her head (I think it must be 5 or 6 falls now). We hire a car and whiz off to see far flung members of the tribe and friends also encountering wandering Australian friends (Sian Prior, sister Yoni and mother Margot) in Penarth, near Cardiff, of all places.

My brother comes with us but is forbidden to drive our Matriarch since the day, long ago, when he decided that to insist on his right of way was infinitely more important than either imminent death or the survival of his car. Seeing an oncoming car proceeding through an area of single lane roadÂ despite John’s right of way, John must accelerate to assert his constitutional rights.

Regrettably, despite the aforementioned right of way, the constitution is silent on what can be done to prevent two cars heading directly towards each other at 100 kms an hour from colliding. He didn’t get his right of way and succeeded only in scaring the bejeesus out of all and sundry and putting two cars off the road. This sin has never been forgiven or forgotten. Given that for 20 years plus he was a commercial pilot one can only be glad that they didn’t operate on roads with give way points.

Our visit includes a day trip to Devon, to visit the Hopkins family, Mum’s erstwhile cousins. More accurately, occasional cousins since they do exist but we don’t see them often. My second cousins. They live on an old thatched farm in deepest Devon and proceed to regale us with tales of farm bureaucracy. Such as the sheep farming neighbour who, during an outbreak of foot and mouth, finds her sheep trapped in aÂ field which starts flooding, becoming more and more boggy.

Frantically she rings the Ag Dept to seek permission to move them directly across the road, a distance of no more than four metres. They refuse saying this would risk spreading foot and mouth. Two weeks later faced by the suffering of her sheep she rings the department and asks them to come and kill the entire flock. The same day the sheep killers turn up. Observing that they will have work waist deep in mud they refuse to do the job unless the farmer allows them to move the sheep onto dry ground…..just across the road. They then proceed to move the flock while the farmer watches in disbelief as her entire flock is butchered on the same piece of ground to which she has vainly sought permission to move them for weeks.

Everyone loves brother John, but he drives us all to distraction. He is the only person, in known history, who, having bought himself a brand new flat, has not unpacked after 8 months. I go to visit and take Mum/Lynette who has never been invited due to the local carnage which, if you could compare an unpacking zone and World War 1, would be the equivalent of the Somme. My malevolent plan has two aims (1) to embarrass brother John into unpacking and (2) to demonstrate, one again, my comparative virtues and, thereby, cement my place as favoured son. Mum denies she has favourites but I, of course, know better. Who could not love perfection?

We enter. Negotiating the corridor takes a cross between an elegant pas de deux (but for one since there is no room for two to pass at once) and a series of backflips. Both sides are lined with shelves (largely empty), boxes and other miscellany. Every so often a deliberate protrusion has been left poking into the 30 cms of remaining corridor….designed to make the unwary face-plant into one of John’s six inkjet printers.

In the lounge there is, between the boxes, just sufficient space for all Peter Dutton’s intelligent thoughts.The kitchen floor looks like it has endured a week long party â€“ mainly, I assume because all the cleaning equipment is still packed and, even it it wasn’t, the available space is so tiny that it’s virtually impossible to clean.

Everyone must stand, in the lounge/kitchen and the sleeping space is a single mattress on the floor under the window. This is a flat which would comfortably house three people. Everywhere else in the bedroom is box heaven partly as a result of brother’s OCD habit of buying 5 of everything if there is the slightest discount even though only one may be needed. I see few family traits in common.

My other brother, Michael, has taken himself off to the northlands (Sunderland, northern England) where he lives a life of a semi-recluse (no doubt protecting his extended family from marauding Scots north of the wall). I ask him if he is will attend the extended family gathering at New Year, when the clans gather from around the world. He thinks not; groups of more than six are excessive. Still, he graces his ageing Mother and her favourite son with a visit as part of his work with the Royal Society for the Protection of Birds.

In fact, Michael and I have much in common, in terms of sense of humour and views on the world â€“ it’s just he is an introvert (like Dad) and I am an extrovert, of sorts, like Mum. On his arrival, we take our little nuclear family off for dinner at a nearby restaurant. I’m not really sure, given the family dynamics, whether this is a great pleasure for Mum or a great trial. But it is the first time all four or of us haveÂ been in one room since 2011. The previous time, prior to that, was Dad’s funeral in 2004 and, that funeral was the first time since 1977, a gap of some 27 years.

This is Part 2 of the blog series “97 Days Adrift in Europe”. Links to other episodes and related content can be found below: