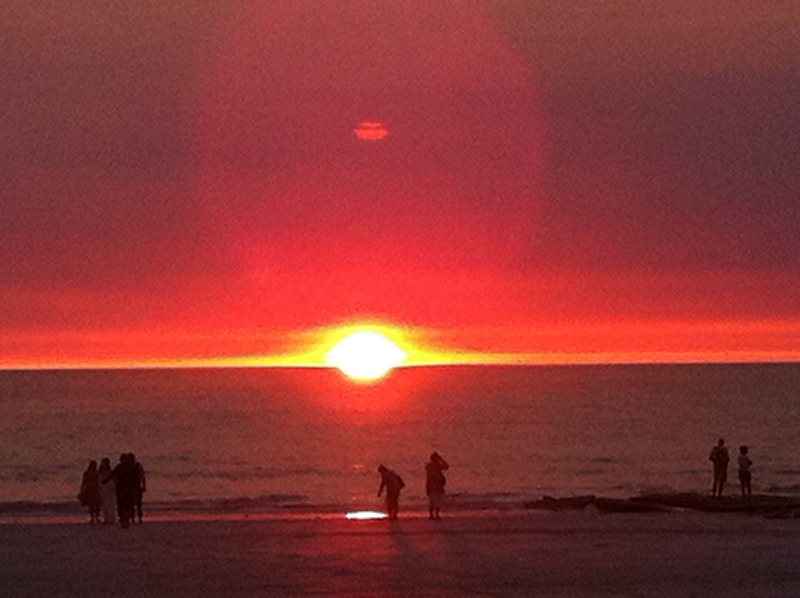 Disclaimer: My fellow travellers have indicated that they feel there is an element of hyperbole and negativity in my description of Broome. For those from Broome who feel that their town is misrepresented please bear in mind that this blog only has the accuracy of the average Murdoch rag.

Also Kaylee would like it known that I refused to enter the water, initially, at Cable Beach, due to stingers (according to her three harmless brown jellyfish) and she feels that this demonstrated an almost unbelievable level of wussiness. But why anyone would go in the water with stingers when there is no surf beats me?

Broome provided some of the more interesting behaviour patterns by our small group of travellers.

Our campground was about 5 kilometres out of Broome but on the main town bus run. This allowed us to avoid driving to town and thus also be able to avoid having the collapse the roof tents every time we wanted to go somewhere. It also allowed for Kaylee and I and Roger and Jill to all operate fairly independently of each other for the first time in several weeks.

It also provided one of the more interesting examples of strange behaviour by our trip companions.

Kaylee and I went to town for shopping and coffee. I required more reading glasses, a new camera filter, new sandals and shorts.

We decide to go the evening showing at the local cinema and propose to meet Roger and Jill there. We call them and they tell us they are in town and are also going. So Kaylee and I jump on the bus to go back to camp to shower and get warmer clothes.

On boarding, we are surprised to encounter Roger and Jill, who are still on the bus and who have clearly decided to spend their entire to visit to Broome sitting on a bus. They explain that exiting the bus involves a 1% chance of Jill encountering a sandfly.

As a result they have been doing blockies of Broome by air-conditioned bus. They are on their fifth circuit of Broome,  and thus have managed to spend the entire day sand-fly free. Jill later tells me she is allergic to sand-flies and that a single sand-fly bite could be fatal.

Bus rides are somewhat unusual in Broome, in that that the drivers can be quite eccentric. Ours not only kept up a running conversation, simultaneously, with all five of the locals that he knew on the bus but interspersed that conversation with various pithy comments and asides about Broome.

This included the ‘fact’ that the derelict croc farm still contains four old crocs over 5 metres long. He claims that they had lost the occasional tourist who decided to camp in the abandoned grounds not knowing that it was an old croc farm. But, apparently, none of the locals mind since the crocs still require feeding and it saves on croc food.

It’s best not to take his bus too often however since he is, apparently, on repeat rather than shuffle as we discovered on subsequent trips.

It’s not only the buses that are a bit off the normal in Broome. According to Jill and Roger the taxis are also unusual as they act as a de facto delivery service for pizzas, alcohol, lost dogs and any other short term need that the average punter might need at short notice in Broome.

Something in the Broome air also seems to have gone to Roger’s head. Alternatively he has been psychologically disturbed by the fact that we must spend four days in town so that he can do a job interview on the following Monday.

At any rate we are all seated in the kitchen, one evening, when Roger arrives. Proceeding briskly to other side of the camp kitchen he faces the microwave and appears to commence worshipping the it.

Standing directly in front he starts genuflecting, repeatedly raising and lowering his head apparently in some form of ritual. The entire kitchen stops to observe. Roger later claims his phone was on charge next to the microwave and he was merely looking at the phone but we know better.

It is quite min-boggling for this average male that it could conceivably take 90 minutes to cut a few strands of keratin. What is it about the female psychology that allows them to accept being ripped off by the retail industry to such an absurd extent. It occurs with hairdressing, clothes, manicures, cosmetics and a myriad other things which, if you are male, cost a fraction of the price, that women are charged.

Broome is not far from the end of our trip and we are rapidly managing to destroy the majority of items that started on the trip. Aside from cups, the chairs are deteriorating. The chair covers are ripped in numerous places, the kitchen implements are now operating in separate pieces, such the potato masher that fell apart in mid-operation.

The coffee perc was destroyed by Kaylee in a fit of strength and is now handle-less (resulting in numerous burns).

The stove has been dropped and is an advanced state of deterioration, the aerial is in two pieces, the kitchen boxes are mostly in three or more pieces. The vehicle bonnet has dents, the tent covers have holes and the tent zips don’t work properly.

The external light has a switch that only operates when it’s in a good mood and there are numerous burn marks in every plastic surface due to my tendency to place the coffee pot down in a hurry. We hope that Nathan has good insurance/depreciation schedule

Broome is, possibly, the most over-rated tourist destination on earth. It’s hot, it’s windy, it’s flat, its architecture is so boring the Gold Coast seems inspired. Its tourist description should be “Boring Broome, come just so that you can bugger off to somewhere more interesting”.

Sure it has Cable Beach but all that has is some nice white sand. It hasn’t seen decent surf since Jesus was a boy and even in winter they have ugly brown blob jelly fish which sting you.

You can’t get decent coffee and you need to see the bank manager before you can afford it anyway. Either that or you need a job in the average WA iron ore mine.

Ditto toasted sandwiches which have the world’s highest markup. Kaylee managed to purchase two bits of white bread, a bit of highly processed ham and plastic cheese, all very lightly toasted (why waste energy?) for $10. Total cost of ingredients about 65 cents, electricity 5c, overheads 5c, labour three minutes at $20 hour = $1, total cost $1.75, mark-up $8.25. Good money if you can get it.

What else? Dinosaur footprints you can only see every two years when the tide is low enough. A spot of whale watching; but then whales are so common these days it’s more interesting watching the planes land at Sydney airport.

And the caravan parks? Given they have put 30,000 people into a town built for 10,000, you are so squashed together you can even hear your neighbour thinking.

Broome does, however, have one of the world’s best cinemas, called the Sun Pictures. It advertises itself as the world’s oldest operating garden theatre.

This fantastic outdoor cinema shows film as it should be; surrounded by film paraphernalia from the 1920s onwards, you sit on extraordinarily uncomfortable chairs but nothing detracts from the setting and a good cushion more than compensates for the chair discomfort.

The cinema also has the rather dubious but bizarre bonus of being right at the end of Broome runway so that, while watching some sequence of film from the 1890’s you wonder why the director has put in sound of a 737 landing until suddenly the plane appears, just skimming the cinema screen on its final approach.

The relationship of the cinema and planes landing does have the added amusement that Jill is probably the only person in known history to miss almost the entire film due to running outside every 20 minutes or so to try and take a picture of a plane almost landing on the cinema. This behaviour can be marked against the special Jill Everett strange behaviour catalogue that I am running.