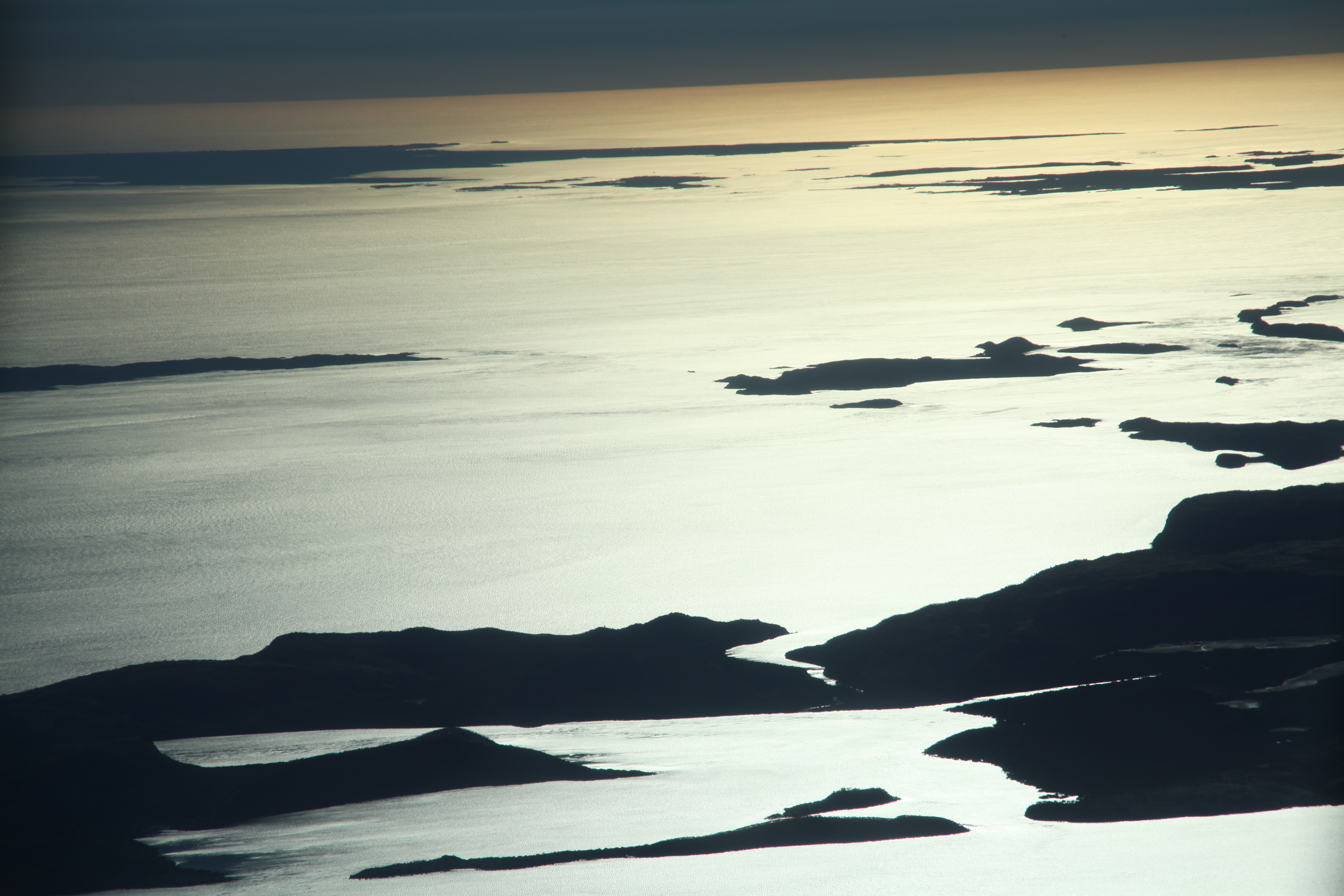 The arrangement for Roger’s and my trip to Horizontal Falls is that we will fly out from Cape Leveque and that Kaylee and Jill will drive back to Broome. We question them about their confidence in changing the vehicle tyres, given the weight of the wheels and other assorted potential mishaps but are assured that anything Roger and I can do they can do better. It turns out that the main benefit of the solo trip home is that Jill and Kaylee are able to play Abba for two hours and that, that event, led to no intra-party arguments. That’s what happens when cultural guidance is removed.

Kaylee and Jill having departed, Roger and I depart on our boysâ€™ own adventure. Departure is by sea-plane from the airstrip near One Arm Point. There are twenty of us in two planes and itâ€™s relatively clear that the trip to Horizontal is a bit the Kimberley equivalent of going to Disney World, only more regimented.

After a half hour flight over the Kimberley coast â€“ which arguably is the highlight of the trip, we land next to a floating city onto which a new load of sightseers is disgorged at about half hour intervals. From there, after a short wait, one boards a jet boat for the trip through the falls â€“ which can only be taken at set times when the falls are neither two large nor too flat.

Generally I am a great believer in the power of cameras to focus ones attention on things that one would otherwise miss. While some may argue that if one spends one time looking through a lens of a camera, you don’t spend much time enjoying the scenery, I have discovered that looking for beauty that is photographable makes one see many things that one might otherwise miss.

Horizontal Falls, however, proves that there are exceptions to the rule. Altogether we do five round-trips through the two sets of falls, two through the wider falls and three through the narrower; so ten runs in total.

Having completed the ten runs, I realise that I didn’t really get to see the gorges or falls at all because I have spent my entire time trying to get video of them. And being a crap videographer, the end result is to have managed to spend a few hundred dollars on several very bad videos of out of focus rock walls and water.

There is probably some form of photographic narcissism involved. In an effort to get the best possible images, all you end up seeing is the inside of a camera and, in the process, you miss the beauty all around.

After our trips through the falls we have lunch and are served beautifully cooked barramundi. Our co-passengers on the trip are largely blue-collar retirees blue and not altogether politically correct. My dinner companion responds to my praise of the barramundi by telling his wife that she will now need to improve her cooking of barramundi. I respond that I would have thought that cooking barramundi was ideal for the barbie and that, that should be his domain, perhaps? He responded, thoughtfully, by saying â€œNo point in having a dog and barking yourself, eh dear?â€ Sometimes very little changes in life.

Roger and I flyÂ back into Broome, getting a good aerial view of Cable Beach, as we land, after our trip to Horizontal Falls and get the bus to drop us at the tourist bureau which is our pre-arranged pick up.

After 15 minutes there is still no sign of our lift, so Roger texts to find out what is causing the delay. There is no reply so we wait on a while longer and try again. This time Roger gets through and is told that the delay has been caused by a puncture on the vehicle which Jill and Kaylee had to fix. They will be many minutes longer. Roger and I decamp to the pub.

Â Thirty minutes later the Nissan pulls up. Interrogated about the supposed flat tyre the story falls apart like a putrefying carcass in the sun. But any story will do to hide the fact that our long wait was caused by a shopping trip among other things.

We confer on options for dinner and decide that it’s time for a Thai dinner.. After numerous campground dinners a bit of variety is in order. At the restaurant, Jill orders a hot soup, which turns out to so hot that she, can barely eat it. So she orders a lassi to help take the edge off. The waitress looks extremely bemused wanting to know what a lassi is? Jill is equally bemused that an Indian does not, apparently, know what a lassi is. I point out to Jill that it is a Thai restaurant not an Indian one and that the Indian food she is eating is actually Thai. Fortunately Jill is not appearing any time soon on any reality cooking shows.

It’s not the end of our Thai restaurant confusion. I ask one of the other waitresses to confirm the name of the Thai King. But she doesn’t know. Scarcely surprising, since she is Indian but I can’t apparently tell a Thai from an Indian. Confusion reigns all around.

After our meal we head out of town for the Broome Bird Observatory where we will be staying the night.

Â We arrive late at Broome Bird Sanctuary and have to unpack in the dark. This seems to pose special challenges for some. Most of us have had doors closed on our fingers at some point in life, but Jill is the only person ever known to have caused herself brain damage by actively smashing a car door down on her head by closing it while remaining standing directly underneath. Apparently she hadnâ€™t worked out that itâ€™s best not to close things while standing directly in the way of the closing object.

At the sanctuary we are allocated a cabin. Each hut is named after a different bird. Very appropriately our cabin has been named after at least one of our number and is called â€œGrey crested babblersâ€.

The Bird Observatory is a well equipped establishment with a kitchen that comes with all mod cons including no less than three espresso makers and, of course is laid out with the express purpose of allowing twitchers (bird watchers to the non-cognescenti) to eat and watch birds at the same time.Â Breakfast conversation is not only limited but tends towards the mono-cultural.

Compared with Broome camp grounds, this is a great place to stay and, even for those not addicted to bird-watching, it provides an eye opening experience of the variety of Australian bird, particularly water birds, of all types.

Itâ€™s unknown whether Jill, at this point had some form of unpleasant experience with bird-watchers or birds, possibly feeling that being assigned to a cabin called â€œGrey Crested Babblersâ€ was some type of deliberate punishment for unknown sins (although I, for one, could list them)â€¦but my notes simply say â€œKaylee on the other hand is going the other wayâ€. It is apparent that she has experienced a form of enlightenment about the possibilities of marital nirvana that might be possible with twitchers, who after one days interaction with them, are clearly the world’s best people.

She has her eyes on one in particular, who is our neighbour, Rod Warnock. Kaylee has decided that some form of pre-arranged marriage with Rod would clearly be better than another week with me â€“ despite her observation at some point that one of the amazing things on the trip is that I have been so nice to her. Apparently a new experience after only twelve years of non-marital bliss.

Kayleeâ€™s instantaneous morphing into a potential twitcheress as a result of her overwhelming attraction to the fraternity is somewhat surprising given some aspects of the kitchen. It is a paradise for existing or potential sufferers of OCD, since every available drawer, cupboard, shelf and implement are labelled to within an inch of their incorrect usage. Who knows, perhaps short sighted twitchers have attempted to mount the rolling pin on their camera instead of the telephoto? Normally however, a labelling frenzy such as this would send Kaylee running a mile but clearly the delights of the twitching world have overcome her distaste for too much order.

For dinner that night I cook wraps. In common with many experiences in life (relationships?) I still haven’t worked out that doing the same thing many times and expecting a different outcome is not good thinking. In this case I learn once again that hot stoves are hot. One might think that after 40+ years of cooking that this would have been a pre-learned lesson. But no, put on the gas, drop vegies down under the cooking pan hobs. Lift up hobs with fingers. Find out that gas flames make metal hot. One thinks of the famous observation, wrongly credited to Einstein, about idiocy, repeating things and expecting different outcomes.

On waking in the morning Kaylee requires defrosting, having been cold in bed. According to my notes this is because (a) Jill and Roger refuse to let us have the bed and (b) take all the blankets. This is exactly the behaviour one might expect from Roger who, is well known for his inordinately selfish behaviour, the type of behaviour that Jill, Kaylee and I are paragons at avoiding.

Again itâ€™s a little unclear what exactly happened, as 12 months after the event the memory is a little sun bleached and the memory synapses faded. Not to let that get in the way, we can assume that there was one double bed and two singles. Roger, no doubt, in his self centred way decided to take the double bed and having done that needed twice as many blankets. This probably left Kaylee and I with two single beds and one one blanket between us.

At this point there is a random note about Kayleeâ€™s feet which states, inter alia, â€œKayleeâ€™s beautiful mud-packed feet but Rogerâ€™s fire fucked themâ€.

What precisely this means, where it occurred and why is unclear but for your elucidation we here include, above, the quote and a picture of said feet to be included in the Museum of Random and unattributed quotes and images.

Prior to leaving the Bird Observatory we all decide to increase our worldly experiences with some bird banding of migratory water birds. This is to occur at midday, we have been told, and so we gather at the office to be given instructions. It’s apparently a team effort with multiple people. Some are required to shift the net, some to hold birds while they are placed them in bags and still others to transfer them to holding cages for banding. It appears, however, that the birds themselves have not been advised of their role in the team effort and, after two hours of fruitless waiting for uncooperative and ungrateful shorebirds, we depart. It appears that our feathered friends don’t realise that being captured under a net, stuffed in a bag and â€œmanâ€ handled into a box is all in their best interests. Ungrateful ingrates.