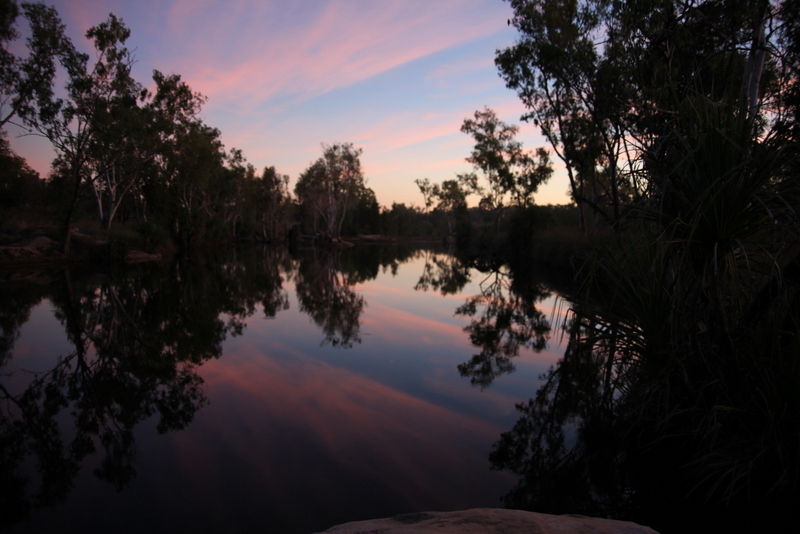 We leave El Questro. Three days is enough. While parts of the station are spectacular and it’s a well run operation, albeit pretty understaffed, it feels too much like what it is – a mass tourist operation.

Our next major stop is Mitchell River but we plan to stop over-night along the way. It is possible to make it to Mitchell River in a day but it’s a very long day. The road is good and we make good time past a series of spectacular bluffs. For anyone who has ever seen a western flick, we feel like we are riding through the American west and that a bunch of so-called Indians should appear on the horizon at any moment. Jill is almost orgasmic with bluff pleasure and, with some difficulty, we restrain her from wading into crocodile infested rivers, such is her excitement.

We cross several major rivers on route including the Durack and the Pentecost and then head to higher country. Shortly after crossing the Pentecost we pass a lookout which gives a great view right along the whole line of bluffs stretching for miles, back up to Wyndham.

We pull into the lookout and are assailed by hundreds of chirps and squawks. We have finally come in range of the only Telecom tower between here and Alaska. It sits at the top of the hill and three phones and two iPads have gone berserk, instantly downloading hundreds of emails and messages. We chat to a car full of Canadians, coming from the west, who tell us that rounding the corner, a kilometre or so back, they were mystified as to why this car was apparently parked on a long stretch of featureless road until they realised that both occupants were busy looking at their mobiles next to the Telstra tower.

Fifty kilometres further on we strike our first accident. We later find that this is a notorious corner on the road. An old 1980s land cruiser has left the road and rolled. The driver’s side is all smashed and the driver is lying by the road waiting for an ambulance which has been called by satellite phone. Half a dozen vehicles have stopped to assist. There is nothing we can do, so we proceed on to Ellen Brae Station for a mid-afternoon stop.

The selection of Ellen Brae is not random. It was noted, on the very first day of our trip, that it advertises freshly baked scones, jam and cream and tea. So this has been a higher priority for some people on our trip (who shall of course be nameless) than Purnululu or the Horizontal Falls. Never mind the gorges, feel the jam and cream.

For all those who may follow in our intrepid footsteps, your trip advisor can report as follows: Ellen Brae is a pleasant interlude from traveling but we were sadly let down by both the food and the standards of those eating the food. Despite claiming to be a tea connoisseur, there was one among us who failed to uphold proper tea standards.

The absence of correct bone china cups, the poor quality of jam (neither home made nor good quality purchased jam), the acceptance of long-life milk, tea bag tea and lower than expected standards for cream should lead to permanent expulsion from the tea connoisseurs club. Even the scones which, it was generally agreed, were of reasonable quality were given unreasonably high marks by our nameless member. We can report as follows the following stars:

Tea: 2.25 of of 5 but marked down to 2 for being served in standard pottery mugs and being made with tea bags!

Scones: 3.5 out of 5. Warm, good texture and consistency but not cordon bleu.

Cream: 3 out of 5. Reasonable quality but not whipped sufficiently.

Evening reflections on the Gibb River

Ambiance: 3.75 out of 5, pleasant old-style shed and furniture. Well placed bird feeders added to the interest and charm. In addition the station had a first rate bush-dunny consisting of bog-standard long-drop (no pun intended), roof height at about 170 centimetres (leaving many visitors with scarred foreheads) and walls of shadecloth.

We can however report that the toasted sandwiches were of a high standard and, Margaret, I’m giving it a 4. Had there been pineapple it would have been 4.5 stars.

Mine hosts appeared to be a bit over it. Bog standard tourist questions such what are the names of the dogs? had obviously led to response fatigue. As a result the owners had provided a standard Q and A, posted on the board, in order to avoid unnecessary interaction with visitors. Among the Q and As were: The dogs’ names are Ned and Kelly, born….; yes, this is the homestead; we bake 200 scones a day etc

Our group also faced a major issue of guilt at Ellen Brae. The walls were adorned with some quality paintings and prints of the region and Kaylee was keen to buy one for a memory. However Roger caused a strong Presbyterian/consumer guilt outbreak by saying that he felt that Kaylee was, somewhat astoundingly, worse than Jill when it comes to momento shopping.

This caused Kaylee to have a first world onset of consumer guilt and she refused to purchase anything else. Her children and their partners, being the main recipients of said consumerism, will no doubt be saddened by this.

mprisonment of her finches, guilt made worse when one died leaving the other a widow (or possibly widower since sex had not been determined). Apparently the surviving finch had survivor guilt and shuffled off the mortal coil soon afterwards.

We left Ellen Brae, with those among us having, variously, fed ourselves, failed to purchase presents for family, visited the bush dunny and self-flagellated over historical gifts of double-barred finches we returned to our vehicle.

In keeping with Roger’s practice the interior was at around 70 degrees centigrade since, despite the presence of many shade trees, we are required to park facing the sun at all times in order to avoid any minimal risk of battery degradation.

Sunset on the road to Mitchell River, overnight camp stop by the Gibb River

It was now around 3 pm and there was certainly no chance of reaching Drysdale River Station on the Kulumburu Road where we had intended to spend the night. The search for an overnight bush camp commenced. At 4 pm we reached the intersection with Kolumburu Rd. Several people were stopped there but we discounted it as it was dry, dusty and right on the main highway. We continued north. 5 kilometres further on we crossed the Gibb River which was still flowing strongly and was a perfect spot for a camp. 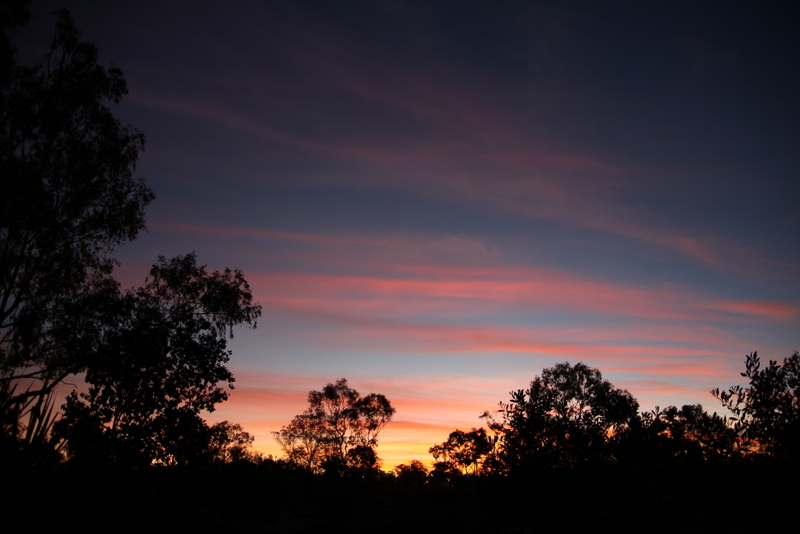 In one of those conundrums of road naming that the Gibb River road never crosses the Gibb River itself. It is, perhaps, a peculiarly Australian phenomenon. If you go to Tennant Creek town you will find it is ten kilometres from Tennant Creek. During a big wet, a few years after Tennant was established, the dray (cart) delivering supplies became bogged short of the town. All the beer was on the dray. So they moved the town to the beer.

Among our fellow campers at the Gibb River crossing are three cyclists who have cycled from Kununurra to Kulumburu and are heading back to the Gibb River Road. Our nearest neighbours are tour guides who tell us they have been coming to the Kimberley for 20 years and that next year will be their last trip due to the increasing numbers of tourists. It’s now too crowded for them.

They have a small poodle which, in my view, like all small dogs, should be used for crocodile bait. It’s a perfect solution. Cats eat 70 million Australian native animals per night. So lets feed the cats to the dogs and the dogs to the crocs. Failing that crying babies in campgrounds are an option as a food source though whether they should be fed to the cats, dogs or crocs is a moot point.

Sunset is beautiful and Kaylee and I sit by the river and have a quite drink to her Mum whose birthday it was. A perfect spot for good memories. We settle in for a relaxing and quiet evening around the camp fire. Moments later our silence is shattered by an approaching rumble and we hear the sound of air brakes and engine brakes.

A road train has arrived and it pulls in about 20 metres away. The two drivers proceed to set up camp and to introduce us to their exemplary taste in music. Rocktober starts blasting the camp, with various renditions of Alice Cooper’s School’s Out for Summer, Queen’s Fat Bottomed Girls, Billy Idol’s White Wedding etc. Our involuntary concert finishes up around 10 pm.

Morning starts at 6 am when the boys from Big Rig start up their engine for departure. The concepts of consideration or of ‘camp voice’ seems to have eluded them. But our early alarm call has the advantage that we are also on the road early, so that we are in Drysdale River around 10 am. This is the last stop for fuel and food before Mitchell Falls. Our stop is not entirely useful given that the Drysdale River store’s entire supply is one shrivelled apple, a black banana and a can of tinned peaches. It does appear to have half of Australia’s known supply of meat, however, and at least it is not the servo with no diesel.

While the supply of diesel is no problem actually getting it into the tank is another issue since the pumps are busier than a Kings Cross brothel during happy hour and, unlike said brothel, it is not self-service. All the pumping has to be done by one of the employees rather than the clients. Not to complain, 30 minutes later we are fuelled and ready to leave.

Only the tyres remain to be checked. I head off in search of the compressor and find the workshop. There is no one around so I enter the building. At this point the local bush equivalent to the ancient mariner appears and orders me out of the workshop. He does not look if he is friendly to latte sipping southern tourists. It is the first time  in 40 years of ignoring workshop signs that I have actually been ordered out of a workshop. The nanny state has clearly reached northern WA. I am, regardless, offered the use of the airline and after checking pressures we depart.