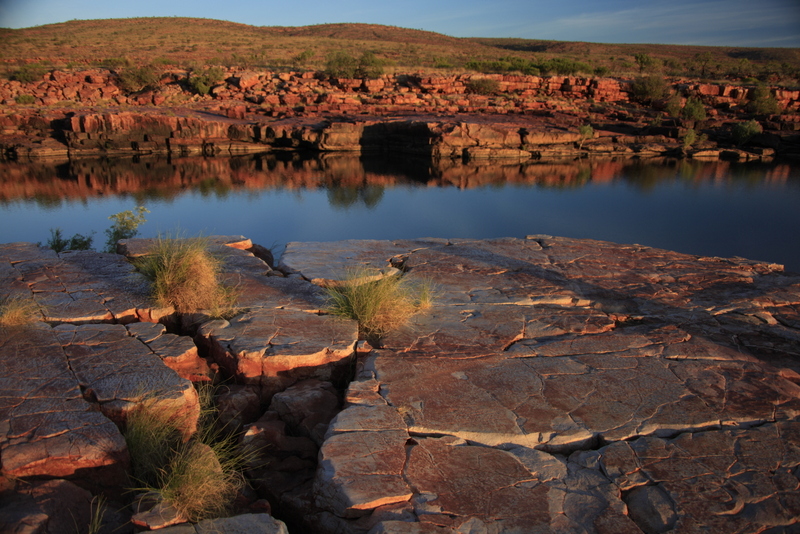 After Manning Gorge, Mornington ‘wilderness’ camp is our next stop.

Mornington is run by Australian Wildlife Conservancy (AWC). Normally one has to book ahead but when we arrived the repeater station that allows one to radio to the station office was out of action and had been replaced by a sign saying “If you arrive prior to 11 am just come on down”. Since we have arrived at 10 am we proceed down to the camp.

Mornington is one of a string of reserves established by AWC [http://www.australianwildlife.org/] which are designed to address the appalling state of the Australian natural environment which has the highest rate of mammal extinctions in the world. The failure to protect habitat, effectively, is one of the key factors in this decline, with the others being excessive burning and feral animals. We should all be eating Cat pie on a daily basis since this would (a) put the cattle industry â€“ which is one of the key factors in habitat destruction â€“ into terminal decline. It would also mean that we would reduce the impact of cats which kill 70 million Australian native animals daily.

The great attraction of Mornington is that it provides some respite from the crowds one encounters in most other parts of the Kimberley. Despite its reputation the Kimberley is not remote and the Gibb River Road is better than the average road in Byron Shire and certainly has less potholes. If you happen to break down the only way you would get as many offers of assistance in, say Sydney, in 30 minutes would be if you stood at the side of the road offering free bags of money. So there is little risk to travelling in the Kimberley any more unless you are either (a) drive dangerously or (b) go fishing for salties with your arms or legs.

The other nice thing about Mornington is that they have a good restaurant although you have to take what is on offer. A la carte might be a bit much to expect given where they are located. Both Kaylee and I and Roger and Jill, separately, decided assist environmental efforts by eradicating some of the excess beef cattle around. Very nice romantic starlit evenings with good wine and food. Or at least Jill and Roger’s would have been had Roger not spent most of the evening on the phone to their sons.

Mornington is where camper-rig envy first kicked in. Having spent the last five weeks lazing around in creeks and walking to remote-ish parts of the Kimberley, Kaylee has decided that would like to continue in this manner should the Department of Education be prepared to continue funding her to laze around on each school holiday. But to do it she requires a state of the art four wheel drive and camping rig.

The end result of this is that anyone who camps within about 200 metres is at risk of having their entire morning devoted to showing Kaylee every spare inch of their ‘rig’. With each inspection some new requirement is added: the motorised tent so that no effort is required to stow it, the double fridge all on rollers, the sliding sink, the kitchen with 50 separate little drawers for every conceivable object, the espresso machine, the built in massage space etc. As each mornings passes you can an extra year to the length of time she will need to work before she can afford even half of such a beast.

Our first morning is spent at Bluebush water hole, on the Fitzroy, its is yet another beautiful swimming hole but from my perspective the main asset is a rope swing which allows me to indulge my never to be sated passion for being a ten-year old and my fantasies about flying.

We visit two gorges at Mornington, Dimond Gorge and Sir John Gorge. Both of these sit on the Fitzroy River which drains a vast area of the Kimberley and has 20 major tributaries. It is 733 kilometres long and drains an area of 94,000 square kilometres, just over 3 times the size of Belgium. Flood flows are among the largest in the world for a catchment of this size and the 1993 flood reached 25,000 cubic metres per second equivalent to 15 Olympic pools each second. Each gorge and waterhole are completely different.

On our second day we head off for Dimond Gorge. Normally we would have hired canoes and gone for a paddle but they are allegedly all booked. On arriving we find 7 canoes lined up unused. Either they have more cancellations than Tiger Air or the booking system leaves something to be desired. Fate comes to our rescue however and we are able to bot a canoe from two couples who have just finished using theirs. They are graziers from Walcha and discussion turns to the drought. They have now had two dry springs and say that a third one, which seems imminent, will be disastrous. Already they have cattle on agistment around Ensay in Victoria.

On the way back from Dimond Gorge we take a quick detour to the wetlands. These are also part of the Fitzroy River and we are fortunate enough to see a pair of Brolgas close up, as well as a mass of long tailed finchs. On our departure I am ambushed by a gaggle of restless flycatchers nearby and in my struggle to both follow them and take pictures I start dropping everything in my possession. Roger following behind dutifully collects everything I drop until he has the appearance of my hired sherpa. He is carrying my binoculars, binocular case, hat, sunglasses, reading glasses, jumper, t-shirt, lens hood, phone, water bottle and almost everything else I seem to have brought on the two month trip. I keeping with our reward policy he gets a Lindt ball but since he can’t eat Lindt balls I add it to my own tally of rewards which I receive just for giving him the opportunity to win a Lindt ball.

Perhaps the most picturesque of the gorges is Sir John Gorge. Unlike most of the others it is not a high sided gorge but a long flat stretch of water bounded by low red rock walls and peppered throughout the water with rock outcrops. At sunset it turns into a photographers paradise with the sunset lighting up the walls and their reflections in the water. When we were there is was perfectly still and there was a perfect sense of tranquility while sitting on the rock ledges.

On our final morning we all plan to go off and do various short walks. But first we must achieve our own version of lost in translation. It is the morning of Premature Packing.

Roger, Kaylee and I are already up and Jill is awake in her tent. As Kaylee and I are going for breakfast in the restaurant I don’t want to leave Roger and Jill to have to pull down the tents alone, so I jump on the roof and start packing it up. But Jill has decided she needs another five minutes dozing and asks me to stop. I assume from her tone that she is joking and I carry on packing. She descends into laughter and keeps repeating her request, so I assume she is finding the sensation of being in a small boat in a storm somewhat amusing. But sadly no, she tells me later, laughter is how she deals with stressful situations and she is not amused.

As with all things it is a question of perspective. I view Jill as being incredibly selfish for wanting an extra sleep when everyone else is up and running and somewhat weird for expressing her annoyance with peals of laughter. Jill views me as incredibly insensitive and disrespectful for not listening to her requests to stop packing. Everyone is displeased. If nothing else one understands how World War 1 started.

I am largely oblivious to all this since Kaylee and I have taken off for a bit of amateur twitching on Annie’s Creek where we see a myriad of bush birds including the purple crowned wren, double-barred finch and crimson finch, as well as bower birds, pigeons, doves, honeyeaters etc. Jill meantime is working herself into a state of furious indignation which is to reveal itself later.

By 10 am we are packed and on the road to Bell Gorge. En route we stop to try and spot the ever-elusive and extremely endangered Gouldian Finch but we are out of luck so we have to make do with Boab Valley which is a creek line almost dominated by 100s of Boab trees.

Mornington disappears behind us and we are on our way to Windjana Gorge.

4 thoughts on “Beating About the Bush, 60 Days in Northern Australia (part 16 – Mornington)”