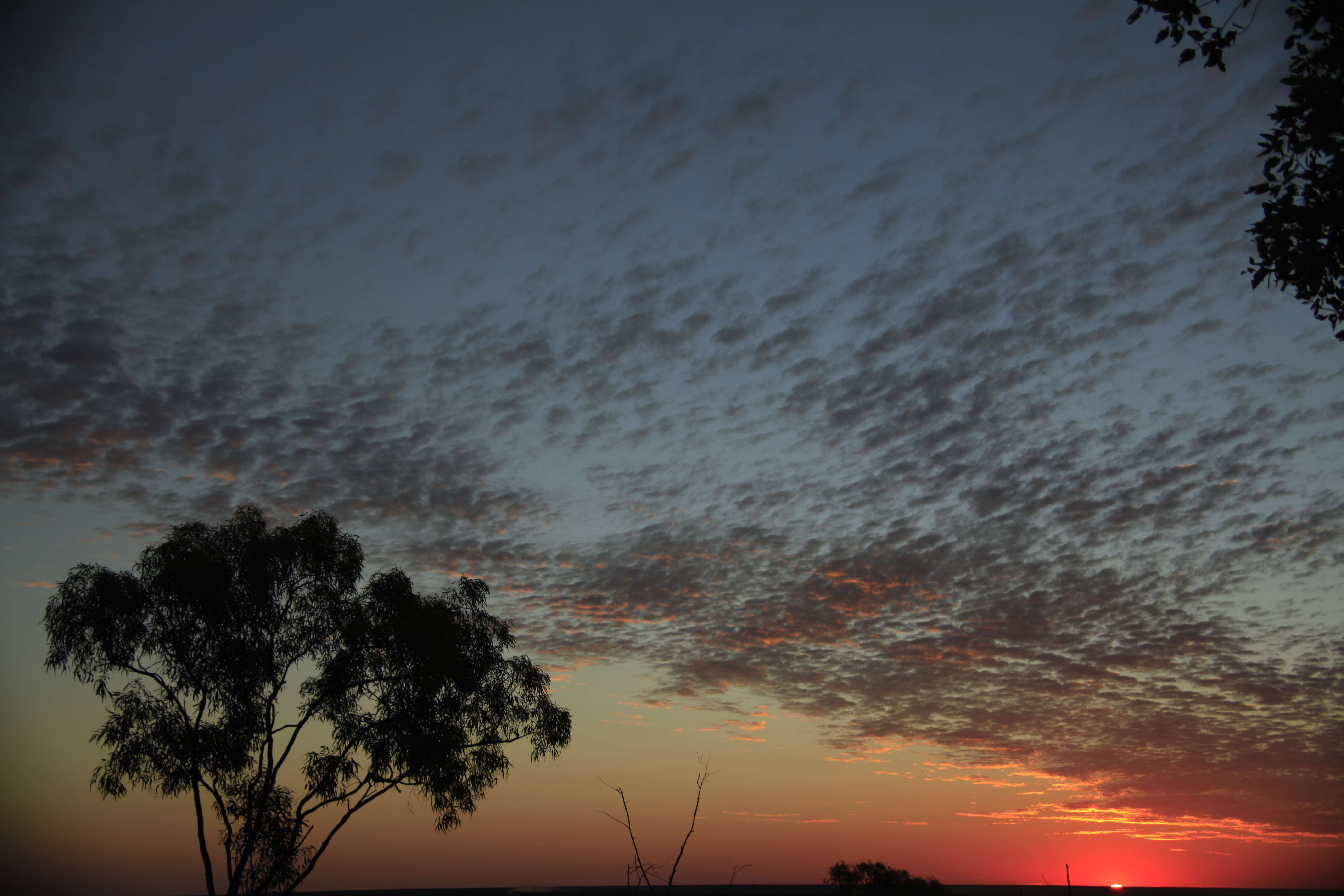 Having repaired our first puncture, we head for Halls Creek. It’s a town that suffers from mixed reports but we find it a pleasant stop. Physically it is not particularly attractive but it clearly has a strong sense of community. 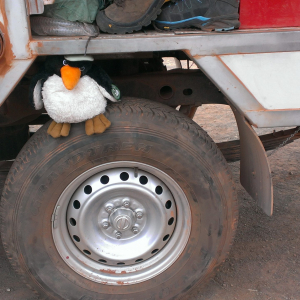 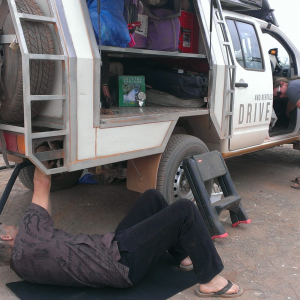 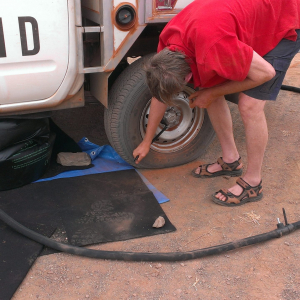 It has a great caravan park with a toilets that are cleaner than the average hospital operating theatre, a new(ish) pool/recreation centre, a good and helpful visitor centre, good coffee at the cafe and a Best Western Motel which, while looking entirely uninviting from the outside, is newly and relatively tastefully renovated and has a restaurant which is more than passable, called “Russian Jack’s” and named after a gold mining legend, .

Our first stop on entering town is to fuel up and then to the tourist bureau. We are beautifully serviced by two very efficient tourist workers who look as if they may well have been abandoned when Priscilla Queen of the Desert passed through. 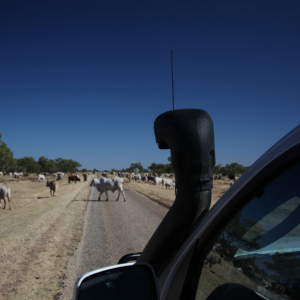 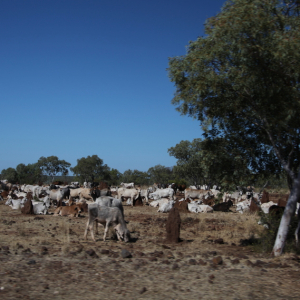 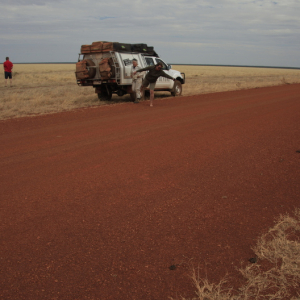 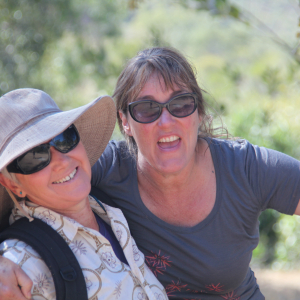 We ask about tyre repairs and I race off to find the recommended location but it is very closed. The only solution to that problem is more coffee because it has turned out that Halls Creek is more multicultural than one might have imagined and we were served good coffee at the Bakery by a South American woman who clearly knows her coffee.

I return to the bakery to find Kaylee on the phone to Telstra again. The frustration meter has finally reached the red zone and I fear for her blood pressure levels. My attempts to persuade her to calm down are met with a stream of invective and arm movements that resemble a manic semaphore operator. I retreat with my coffee. Kaylee gives up. We head for the campground.

The campground ‘grass’ doesn’t look as if it has seen water in several years and the pine railings have passed their use by date. We camp near a permanent resident living in a dilapidated camper that clearly no longer runs. The resident himself has seen better days and has a hang dog look and one arm.

On the other side of the camping circle are two women who appear obsessively neat. Jill postulates that they are lesbian based on her extensive sampling of lesbian campers which has led to her lesbian camping theory. 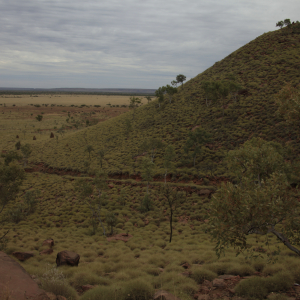 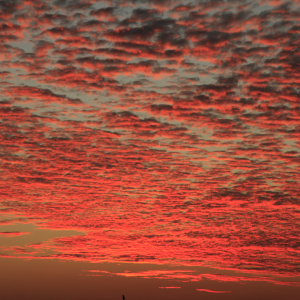 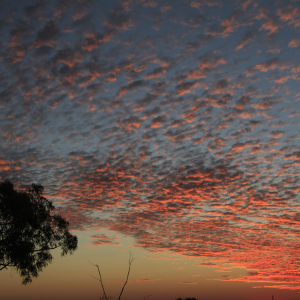 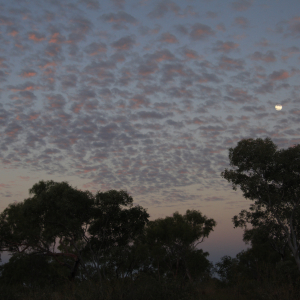 According to Jill, she has camped with two groups of lesbian campers at different times. Both have been very neat and therefore, so the theory goes, if two women campers are neat they are, ipso facto, lesbians. We question her on her theory and the margin of error. Did she run controls? No satisfactory answers are forthcoming. Further research and larger samples are required.

We rush to cook dinner ahead of the approaching rain. Despite the expected rain and cold, we must first complete important pre-dinner rituals. We have purchased gin and tonic and dinner cannot be consumed prior to gin and tonic, as is required by travel regulations.

Up to this point dinner standards have been unacceptably low since not only have pre-dinner rituals not been followed but decent coffee has not been available after dinner due to the absence of an espresso maker. That was a situation that was remedied in Katherine with the purchase of a stove-top espresso maker.

To complement the important elements of the meal we are having pasta with roast chicken and Roger is despatched to town with orders never to return without an organic, free-range, roast chicken. When he has not returned after 60 minutes we fear he may have taken his instructions seriously. But, no, he was just having a toilet stop which, for Roger, can take a long time.

Across the campground is a lone cyclist who we invite for drinks. Bert is a Dutch mechanic who works for four months of the year and cycles for another eight months.His partner who is back in the Netherlands is due to join him. He met her while cycling from Puntas Arenas in southern Chile to Alaska.

He rides a specially constructed mountain bike which can carry all his gear. This includes a special single wheel trailer behind his bike over the connecting arm of which he hangs 50 litres of water thus enabling him to ride from Sydney to Perth via Alice and his current ride which is the Canning Stock route. He has also cycled through China to Lao, Vietnam and Burma. 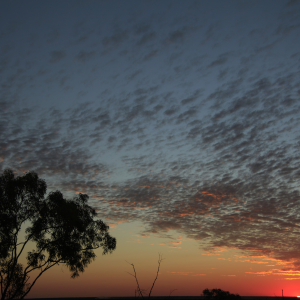 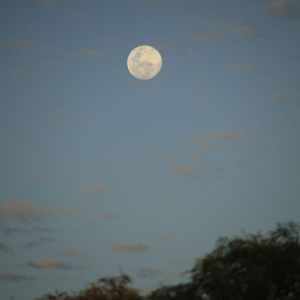 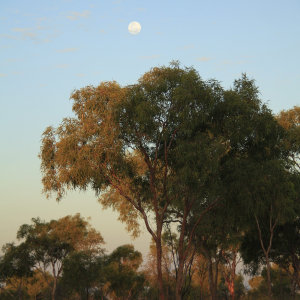 I am able to commiserate with Bert who after two weeks is still waiting for a special food parcel with his dehydrated food. It was sent via Australia Post from Adelaide and is still somewhere in a special Australia Post orbit along with my package to Darwin which has clearly been lost somewhere in the same parcel black hole. This reminds me to check Australia Post’s special email tracking system, since we now have internet reception.

Checking the Australia Post tracking system is the equivalent, in the internet world, of being put on hold by Telstra. Thank you for checking, but your package is entirely unimportant to us. We have no idea where it is, failed to scan it properly, cannot give you any useful information and, in any case can only give you information if you are the sender but not if you are the recipient. Your parcel may or may not still be extant and may or may not arrive one day. Check again when your frustration levels have fallen.

Bed-time approaches. Today, Jill sets a new record for early to bed as she turns in slightly before 7 pm. Even Kaylee who thinks that any bed-time after 9.30 pm is the equivalent of a night on the town, has not managed to get to bed this early, which I note, judging by the parties going on around us, (NAIDOC week celebrations are ongoing) is earlier than the bed-time of a Halls Creek 10 year old.

During the day we have discovered that the car has suffered more undercarriage issues. It is this tendency to temperamental behaviour that has led to her being called Beyonce.

It appears that the car repairs that Jill undertook that neatly removed the radiator crash plate from beneath the car also sheared off the bolts that held the main sump protection plates and these are now hanging down about two inches beneath the front of the vehicle, perfectly placed to hit any large rocks or other obstructions in the road. It this occurs the plate will buckle smashing the sump and bringing our trip to a premature climax.

The night brings heavy rain and in the morning it is cold and gloomy. Our night has been disturbed by the NAIDOC celebrations but the music quality was good. No Abba, country music or heavy metal was played. But Kaylee feels she has been living on the edge in what she perceives as a risky town replete with the regular sound of police sirens. She is a little disappointed when I point out it was a car alarm.

Jill and I both have early morning showers. Mine occurs when I pass under the tent awning at 7am and it decides to drop its night’s accumulation of cold water on me. Jill suffers early morning trauma when, at 7.10 am she pours the content of her third cup of tea on herself. But her trauma is not caused by the shock of the hot water but by the loss of the tea. Counselling is in order.

Kaylee’s spirit is lifted, however by her visit to the shower. On entering the shower the sole female occupant turns to Kaylee and radiant smile and a look of joy and adulation passes over her face as she raises her arms and shouts “At last you have come”. It is apparently truly a miracle and Kaylee foresees a new career as the Messiah.

Sadly, she reports later, it is merely that the worshipper was unable to reach the socket in order to plug in her hair drier and Kaylee, being three inches taller, could. Kaylee tries to persuade us that she was the same height as the other woman and, in keeping with her new status as Messiah, simply levitated.

I, again, call Nathan the company owner about Beyonce’s problems. He commiserates with us that in two years of operations he has received five calls from renters who have had on-road problems and we have made three of them. I suspect he is thinking that we are the on-road problem. He is concerned at the potential for terminal damage if we cannot get the plate fixed and suggests we do so in Halls Creek. We set off to do a grand tour of Halls Creek looking for workshops. The first place can do nothing for a week.

At Fitzgerald Motors the proprietor is not happy. Neither is the proprietor’s Rottweiler which Jill has had to befriend before it is possible to approach Mr Fitzgerald. While the Rottie seems happy with white friends the two little black girls cycling past do not seem confident that it will like people with black skin and ask if the dog is safe.

It reminds me that, when living in South Africa, dogs would let us white kids walk past peacefully but any black-skinned people were at risk of being torn limb from limb.

White South Africans would train their dogs to attack black people by putting them in sacks, then beating the dogs and, on releasing them, ensure that the first people they saw were black. This created in the dogs a fear and visceral hatred of blacks.

The reason for Fitzgerald’s unhappiness is that he has two mechanics but, apparently, they have been watching a World Cup Final which took place at 2 pm the previous day and have been unable to attend work as a result. His general level of satisfaction with Halls Creek is apparent. “Who would want to live in this cunt of a place he observes”. So he is also unable to assist to his mechanic shortage.

We repair for a further coffee and cake. Roger and I consult. We need to fix the plate so a visit to the hardware is needed in order to search for a couple of 6 mm bolts. The owner of the hardware store cannot assist since he is in worse condition than Beyonce and will not advance beyond his counter since such a long walk might bring on an early end to life.

After much searching we find the right bolts. But we are to be disappointed since one of the missing bolts has sheared off in the nut preventing the repair. We consult further; my advice is cable ties and fencing wire which will fix 95% of all mechanical and household problems. 20 minutes later we are done.

Beyonce is now ready for anything she will encounter and Roger has also fixed an errant water problem by tightening the clamp on the hose. Our potential future earnings are escalating; rally driving, blues band and now Horton and Harris car repairs. Right on!!