Purnululu has been on the bucket list of all four of us since the year dot. We turn off the road to Kununurra with a fair degree of anticipation. Rumour has it that the road is rough but in common with all the other allegedly bad roads it is, in fact, an easy run and the trip from the Great Northern Highway takes us just two hours.

There are two camp grounds and we have opted for the northern one. There are four potential camping areas which poses a greater than normal decision making challenge. Even under normal circumstances, where there is only one camping area, it takes us about 15 minutes of inspection before we select a site and another fifteen minutes arguing about how the tents should be aligned and whether the solar panel (which is fixed to the front of vehicle) needs to face due north, or slightly west or east of north.

Roger is a fundi and insists on due north, whereas I am a realo and think that the sun will shine tomorrow. Being a fundamentalist Roger normally wins out. At this point he normally gets out his compass and forces the driver to perform something akin to the mating dance of a preying mantis in order to get the truck aligned to his satisfaction.

Further points for debate are about the direction the tents should face, whether the light which is attached to the passenger side door is correctly aligned for cooking and if we are near enough to a fire ring. Who cares if we visit Mitchell Plateau or Geikie Gorge so long as we get the right camp spot.

Purnululu is another game altogether. Before we can even start discussing the correct camp site or the car parking preferences, we must select a camping area. We circle each camping area, no doubt losing all the best camp sites to other more decisive campers in the process. Finally camping area D is selected though the revisionists later point out that, in fact, area C was better.

Two circuits of D later, we finally select a site. Godot has come and gone but everyone is happy. Only the parking/mating ritual remains to be accomplished but exhaustion has set in and the punters have ceased arguing.

Evening sees us on the lookout over the northern parts of Purnululu. As with many spectacular parts of the world, no photograph can actually prepare you for the reality of the real thing. The red rocks of the escarpment are lit up orange and red by the setting sun and we all sit there clicking away. A Kiwi tourist is busy taking multiple photos and demonstrates the in-built photo stitching facility of his camera which produces a neat panorama in a matter of seconds. I attempt to do the same with my camera and succeed only in a beautiful set of out of focus and over-exposed shots. I have had the camera several years but it is time to read the manual, I think.

In the morning we head off for the first of our gorge walks, Echidna Gorge. It is a little over-rated and the track is like walking along Bourke Street, such are the crowds. There is a tour party in the Gorge and we get into conversation at the end of Gorge. One of their party observes that it has taken aeons to form the gorge and that this proves that climate change is rubbish since change is always occurring. Who, he asks, is making money from climate change? Exercising my well known self restraint I refrain from bludgeoning him with a nearby rock but Jill is convinced he only just escaped with his life.

We return down the gorge and Roger and I nick up to the lookout at the beginning. It is a spectacular view both ways down the valley. We finish the day with a stroll along the escarpment walk, which few people do, apparently, but which I find more interesting and infinitely more rewarding than Echidna Gorge. The escarpment walk is a twitchers paradise with a mass of finches, pardalotes and wrens. 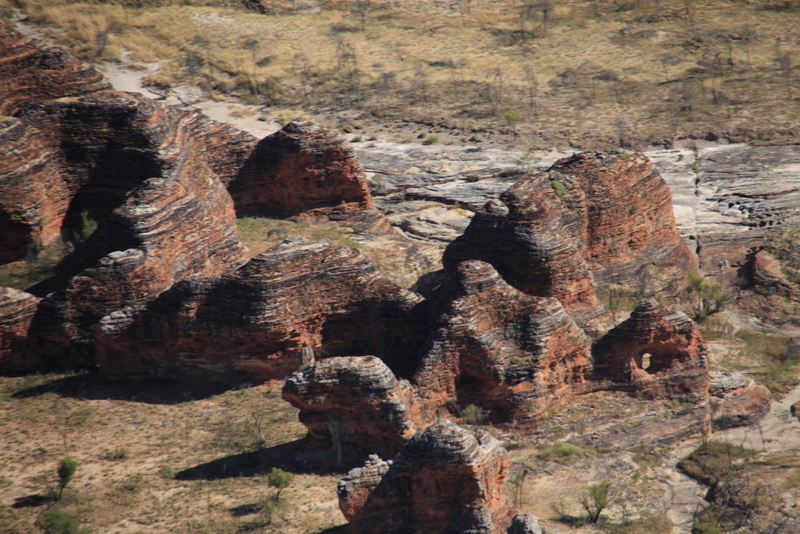 Its been a long and hot day. Our truck is equipped with a 100 litre water tank and a shower and I decide to ablute. The tarpaulin is set up, the shower is cranked and I disrobe. There is a measure of disbelief in the assembled ranks that I don’t seem to care one jot that the campers on both sides are able to view me cavorting naked in the shower. I point out that if a normal naked body bothers them it is their problem not mine.

The others are now envious of my newly pristine body shining in the evening sun and decide to follow suit. Jill is next and Roger rigs a form of Moroccan bath-house for her which preserves a degree of modesty. Roger follows but decides that, while no bath-house is necessary, he will shower in his jocks. Only one fellow traveller remains un-showered but Kaylee is reluctant since she is unabashedly modest. Besides her modesty, there is the problem, she announces in her best, very loud, teachers voice, that she needs to wash her crack. The volume of the announcement is such that it is therefore audible throughout the entire camp site.

We all fall about laughing at the irony that while Kaylee won’t shower naked she is prepared to tell approximately 100 fellow campers that she is about to wash her cracks. I question her about why it is a problem to do said washing in the shower? After all I have. She glances at the tarpaulin which is covered with about 5 mm of used shower water and looks at me in horror. But that means you and Jill and Roger were all standing in faeces laden water. Surprisingly we are all still alive and seem unaware of and unfazed by this revelation. Kaylee’s resistance crumbles and, with the aid of a couple of sarongs and towels, the cracks and other nether regions are made pristine.

Day two is our expedition to the southern part of the park the area which contains the famous beehive formations. It’s a day long walk up Whipsnake Gorge with side trips into Cathedral Gorge and to the lookout. The walk is mainly along the dry bed of the main creek and is a great day walk. The bed of the river is its own little tapestry of massive sculpted channels and holes, while on both sides are the massive sandstone walls of alternating red and black rock.

Because it is one of the longer walks there are few people along the trail and when we arrive at the end of Whipsnake Gorge the only other people are a Swiss-German family for whom we provide some light entertainment with the ensuring paranoid conversation.

I am the last to arrive at the end of the Gorge and I do so to the sight of Jill and Kaylee scrambling for cover, away from the cliff above. They warn me about the cracking sound we can hear saying that we are in danger of being hit by an imminent rockfall (or perhaps a part falling from MH370).

Moments later the sound occurs again and they both move further away from the cliff. A discussion ensues and it’s pointed out that in fact, as with trees losing their branches, it’s arguable that the safest place during a rockfall is pressed against the cliff-face. I’m not sure that this is in fact true but it sounds good.

There is a further cracking and cautious glances are made at the cliff face until Roger points out the Swiss man has a plastic drink bottle in his pocket which makes a crackling sound each time he moves. Jill and Kaylee have spent more energy avoiding a drink bottle than they have spent walking. The only thing that has taken Jill more energy on the trip is making tea. Roger tells the Swiss man that his crackling water bottle has created a sense of an imminent disaster and he repeats it with some amusement to his wife and children.

We are back at the car in mid-afternoon and head back to camp. Along the way a couple of photo stops are made and at one I climb on the bonnet which leads to a couple of temporary dents in it. Kaylee is unamused and I end in the doghouse. The rest of the trip is passed in a mixture of strained silence and conversational attempts to ignore the opprobrium that has descended on me. Kaylee thinks I am an irresponsible idiot and I think it’s a car.

Our final morning features the apparently obligatory helicopter ride which features in all the advertising for Purnululu. The proposal to do the helicopter ride has been the source of some debate but we have eventually opted for a contingent of three, with Jill guarding Beyonce, and a duration of 18 minutes which is the shortest trip one can buy. Kaylee is a reluctant passenger.

Despite reservations, the chopper ride is a raging success. There are no doors on the helicopter so one almost has a sensation of being outside. It’s only from above that one can really appreciate the scale of Purnululu which, amazingly was only discovered by the tourist industry and wider world in the 1970s when a local grazier took a TV crew for trip over the landscape.

We return to the ground. Kaylee is a convert and now wants, apparently, to be a helicopter pilot.