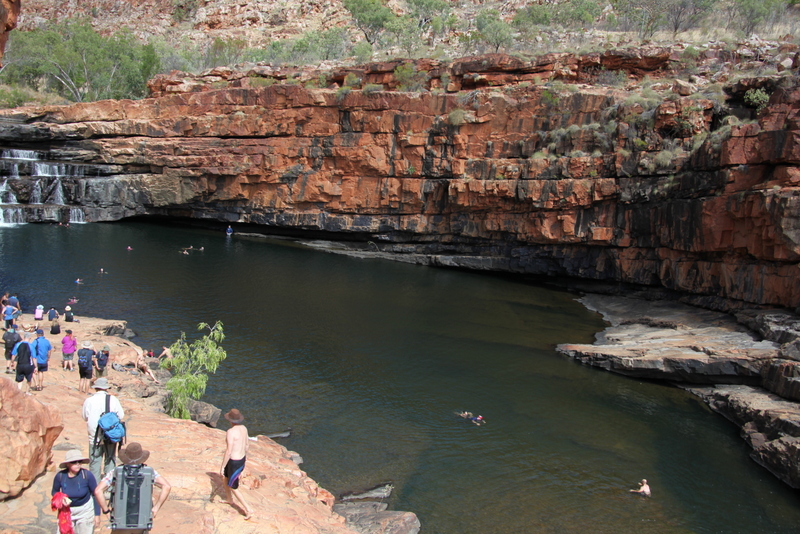 We spend the day at Munurru lazing by the creek, drinking tea, reading and writing. Our day is occasionally interrupted by people passing by to go to the river. Among them are three young Victorians who, we discover, have driven from the far side of the campground. We exchange comments about the failings of Gen X. They are somewhat embarrassed by their laziness and we are somewhat amused. I write on their car and take photos as evidence.

Our final evening at Munurru is a cool, still, starlit night and we sit around the fire tracking stars and planets. It is perfectly peaceful. By nine bed time approaches and I go to get my toothbrush. My companions are not happy as the ambience of the campfire-lit night is shattered by the electric whirring of my brush. To the others this is further evidence of my lack of sincerity about travelling light since I also require a charger and an inverter to keep my dental hygiene up to scratch. The sound of the toothbrush adds insult to injury since the inverter itself has a noisy fan and I chose to charge my toothbrush during lunch. From their perspective I have now destroyed both a pleasant lunch and evening.

We start to pull the tents down. One again the zip will not close. The zip on the rear tent has malfunctioned due to excessive dirt in the zip. The subsequent use of excessive force to close it appears to have deformed several of the zip bits. I have been advocating WD40 for several days as the solution since, as everyone knows, WD40 fixes almost any problem. In the absence of WD40, cable ties or fencing wire will do. Or duct tape. Roger however is dubious. He believes that the presence of WD40 will only attract more dust, which of course it will. But more WD40 will fix that as I have demonstrated to my own satisfaction on many previous occasions. Too little lubrication? More WD40. Too much lubrication? More WD40 as this will attract dust and fix the over-lubrication. Any idiot knows that. But Roger has resisted and we still have no WD40.

Meanwhile our neighbours, who are a large party with four vehicles, have a mechanical problem of indeterminate nature. It requires a bloke conference to fix it and the numbers progressively grow. It’s a form of mens’ shed but without the shed. Initially there are just two blokes examining the thingymajig or the howsyourfather…whatever it is that is broken. Within five minutes there are four blokes and by the time ten minutes have passed there are 6 blokes discussing the issue. Blokes have started to arrive from neighbouring sites and there are even two women standing nearby marveling at the DIY miracle that is a bloke(s) and a howsyourfather.

I wander over on my way to the dunny and as an aside ask whether if another six blokes were added to group diligently looking at and passing around the thingummywhatsit it might in fact just fix itself. One of the group looks at me, â€œNah, that would never work, none of us have a beer in our handsâ€.

We are nearly packed. I have found a large attractive rock that would work well in my garden but, sadly our group refuses me permission to put it in the car even though it only weights 250kg and has a diameter of only 450 mm. They question our ability to get it off the ground in any case and feel it would be detrimental to the local environment if everyone removed a rock even though, as I point out, there are a lot of rocks.

My bona fides now come under attack as Roger suggests I have undergone a personality transformation as I was the primary motivational speaker behind our efforts to travel light but am now trying to add large rocks to our entourage.

The final task as always is the Magic Pudding. Roger and Jill have decided to pack their entire worldly possessions into a conventional blue suitcase. Apart from the fact that it is bulky and unwieldy, it has to contain about ten times as many clothes and other items as it was designed to take. The time taken to pack the magic pudding is about the same as an orbit of pluto around the sun. Kaylee and I can take a half day bush-walk, eat breakfast, scratch all required body parts and say more hail marys than the Pope at Mass by the time the Magic Pudding is packed and loaded.

On our way to the main road we stop in at the two art sites nearly. Both are set in a idyllic landscape of rock outcrops.

By 8.30 we are away and travelling south. We make good time and about 40 kms from Drysdale Station we pass a Britz hire troop carrier travelling slowly in the same direction. Another 25 kms on and we are flagged down by a crew in a white landcruiser. They have already had two punctures and now have a third. But we cannot help them as we have a six stud wheel and they have a five stud wheel. The lead actor introduces himself as Alex Frank from Kulumburu. He has his two sons, daughter-in-law and three grandchildren with him.

We offer to take one of his wheels to Drysdale station, get it fixed and bring it back but he is not keen on that idea. As we are debating the issue the hire vehicle that we passed previously, from Britz campers, pulls up. Alex flags them down but comes back dispirited. They are French speakers and their English is limited. But Alex is fortunate and I am shanghaied as translator. We have two very cautious Belgians, Jaques and Brigitte.

Jaques, in particular is very reluctant to be a party to loaning their only spare tyre. He is worried about losing their deposit if something goes wrong. My role now moves from translator to negotiator. I try to persuade Jaques that they are at no risk and that we can proceed to Drysdale Station â€œensembleâ€. He remains reluctant. Alex, on the other hand, is pressing his case.

He wants me to just get a wrench and simply hijack Jaques tyre. Jaques doesn’t understand the culture he tells me. He starts gesticulating, telling Jaques if he doesn’t help it will rain and he will get bogged. We are in a conundrum where Alex cannot

possibly under stand Jaques attachment to his spare tyre and thinks he can resolve the situation by persuading me to take direct action. I work on Jaques. He is about to concede when he notices that the front passenger tyre is also half flat.

â€œC’est impossible…â€ he tells me. I spring into mid-east shuttle diplomacy mode, telling Alex, on the one hand, to stop humbugging me. It’s not me he needs to persuade. With Jaques I am in cultural interpreter mode, explaining that â€œC’est toujours comme Ã§a…â€ I try to explain that by the standards of many Aboriginal communities Alex’s vehicle is a Rolls Royce…â€virtually new..â€ By now Alex’s sons have out the compressor and are blowing up the half-deflated tyre.

Meanwhile Alex is demanding to know why we went to Mitchell Plateau and didn’t visit Kulumburu. I tell him that I heard the blackfellas up that way were too dangerous and that we were a little scared. I tell him I worked with Aboriginal people in Darwin and they warned me about people from Kulumburu. This manages to divert Alex from harassing me and Jaques and he starts explaining to his sons that I worked with Blackfellas and this explains why he can’t humbug me.

Jaques meanwhile has his ear to the newly pumped up tyre. He cannot hear any more hissing. We are on the cusp of victory. Finally he gets out the key to the spare and we are under way. Within 2 minutes the sons have on the car and we are away, Jaques leading the way. But a few minutes of eating dust and Alex and Sons decide to overtake. Within minutes they are out of sight. We plod along in Jaques wake who has told me he is convinced that Australians are â€œfouâ€ (mad) for driving so fast on dirt roads. It’s why they get so many punctures he says. At this point my French runs out as we try and debate concepts such as corrugations and principles of speed versus comfort.

We round a corner. Alex and Sons are stopped. The bonnet’s driver side rear attachment has fractured and the bonnet has broken the baling twine and flown off. It is completely detached with the exception of the passenger side attachment and the hydraulic arm on the drivers side. When we arrive it is precariously perched on the vehicle, but we cannot get it back into position because the pressure from the hydraulic arm prevents us pushing it back. At this point Jaques gets into the swing of things and suggests removing the hydraulic arm so we can push it back. The bonnet clicks satisfyingly into position. We are off again.

Finally we arrive in Drysdale. But Alex and Sons seem disinterested in giving back Jaques his tyre. I ask Jaques if he is â€œpressÃ©â€ (in a hurry). He says he is. I go to Alex and tell him Jaques and Brigitte are in a hurry. I explain they are on Whitefella time. Time is money. Alex shouts at his boys and they spring into action. We go for lunch. But fifteen minutes later Jaques and Brigitte who are supposed to be lunching with us have still not reappeared.

I go to check. They boys have got diverted in stripping another deceased landcruiser that belongs to another son. I have to remonstrate with Alex and remind him that the others are in a hurry. He seems to have forgotten and another set of instructions are issued. Within a couple of minutes all is fixed. So it goes.

Finally we lunch. Jaques is retired farmer from southern Belgium and Brigitte is a child care worker. They have five children between them, one of whom is in construction in Sydney. Hence their frequent visits to Australia. Lunch is very staccato as Jill and I speak Jaques and Brigitte and Kaylee and Roger look bemused. When I remember I translate but I will not soon be applying for a job as an international translator since the series of diplomatic incidents that would result would make Tony Abbott’s series of gaffes look inoffensive.

My final note for this blog records that Kaylee was provocative on Sunday 28th. But there is no supporting information, so one can only surmise who was being provoked and why. Since it was Roger who stated that Kaylee was being provocative and in keeping with the traditional deterioration in relationships between travelling companions, it’s likely that Kaylee was making some pertinent and accurate comment on either Roger or Jill’s proclivities, such as Roger’s desire to spend his entire rest day grovelling under vehicles attaching additional bits of fencing wire and cable ties. No rest for those with OCD.