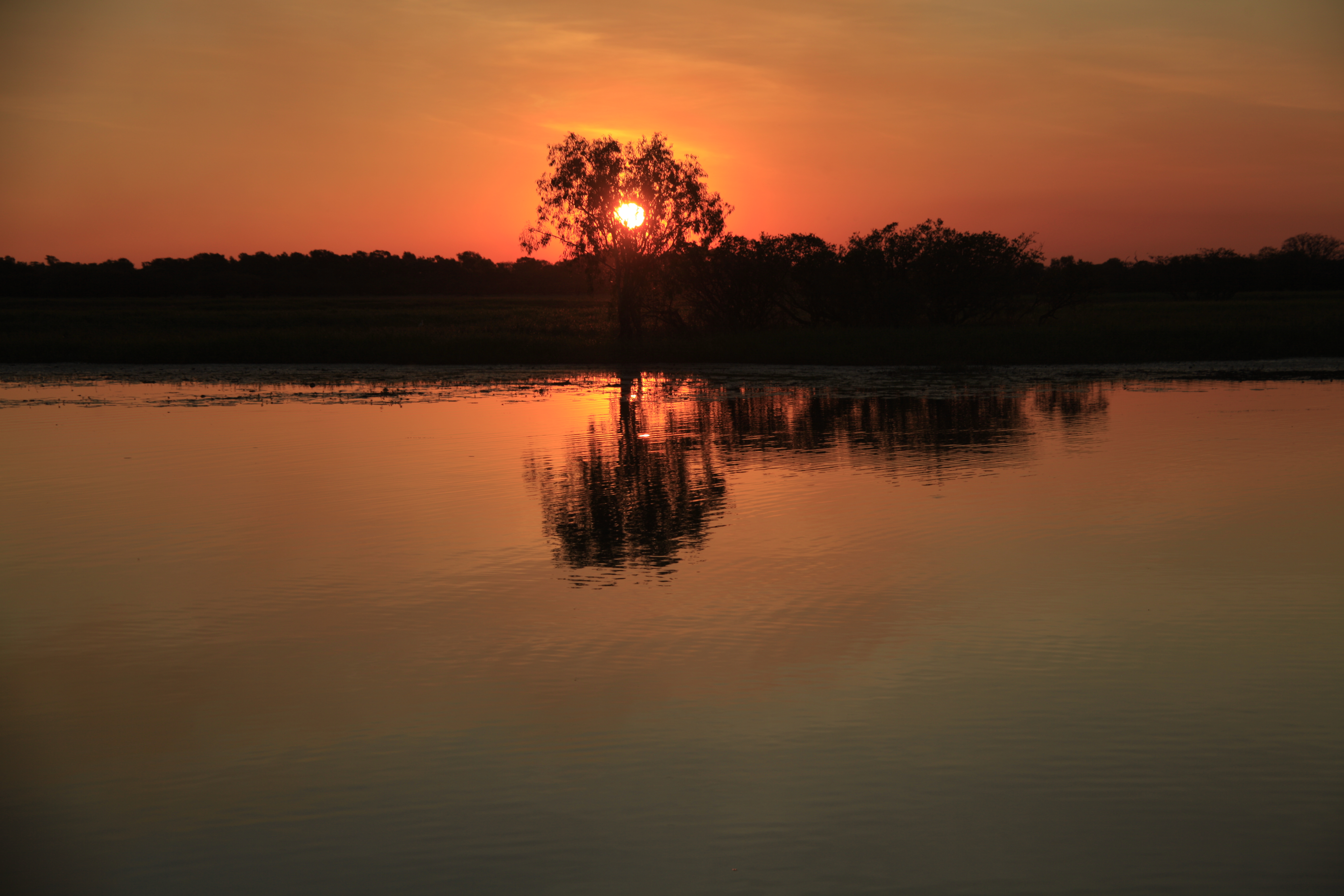 The end of week one sees us heading for Cooinda to do the obligatory Yellow Waters Cruise and, beyond that, to head further south to Gunlom and Koolpin Gorge.

We are booked in for a sunset cruise and arrive in time to set up camp and head down to Yellow Waters, a part of the South Alligator wetlands. I last did this cruise 20 years ago. Then there was one boat with about 15 people on the evening cruise, now there are four boats each with forty people on board.

The Yellow Waters sunset cruise used to be one of the truly great wetland experiences, particularly later in the year when up to a million magpie geese feed on the wetlands along with thousands of other water birds.

I am cynical that with 160 people on four boats it will be anything other than a very superficial tourist experience, but am pleasantly surprised. You still get to see much of what you would have seen in a smaller boat and the guide is excellent. The only drawback being one can’t really ask the questions one used to be able to ask.

We spend the night at the Cooinda Hotel camp ground. It’s not the most peaceful or natural of locations and, for pretty much every resident of the campground, sleep was an intermittent exercise up until about 2 am, at which point the group of ten or so Indian tourists, who had apparently been attempting to imitate a Bombay Indian wedding (normally involving 1000 guests), decided to turn in.

Dinner duties were allocated to Kaylee and I, but Jill decided that, after about 36 seconds without food, she was hungrier than a bear after winter. Jill has a metronomic gastric system which requires replenishing with tea at about 10 minute intervals and food about every two hours.

As a result, when Kaylee and I decamped for pre-dinner drinks at the hotel, dinner duties changed hands. This was to later cause mayhem in the dinner stakes since she and Roger cooked dinner with unauthorised ingredients, without informing us, thereby throwing succeeding dinners into chaos since the ingredients for those planned dinners had already been consumed.

The stress involved in the our discovery of the theft of Kaylee’s and my dinner ingredients leads to an urgent requirement for relief for Jill. This involves plugging her earphones into her iPod, closing her eyes and performing a public dance routine. That routnie involves a cross between rap, salsa, a brolga dancing, yoga, and giving birth. But it seems to work for Jill and provides some degree of hilarity for the rest of the campground.

On Monday July 7, we decamp for Koolpin Gorge and Gunlom. When I lived in Darwin this was known as UDP (Uranium Development Project Falls) so-named, rather romantically, by mining companies at the height of the 60s uranium boom. However we discover that Koolpin Gorge is closed due to a large saltie having been spotted. It’s now almost 50 years since crocodiles were hunted almost to extinction and they are no longer scared of humans. As numbers have increased the smaller crocs have been forced further upstream and places where it was perfectly safe to swim 20 years ago are no longer safe.

With plan A foiled by too much crocodile sex, we head for Gunlom. Jill has attempted to reach back into her memory synapses and has convinced us that she once visited Gunlom and that it was the highlight of her previous trip to the NT…astoundingly fabulous. She has talked it up so much that she is now nervous that we will not be impressed.

All of this area, including Koolpin, was once excluded from Kakadu. The Hawke Government promised to include it as a third extension of Kakadu, the original area of Kakadu having already been expanded once. At that time the two grazing leases, which comprised the proposed stage 3, Gimbat and Goodparla were resumed (the leases were re-purchased by the Federal Government) for that purpose.

The proposed Stage 3 extension was stymied by the discovery of gold by mining company BHP, the 1980s BHP at Coronation Hill adjacent to the South Alligator River.

As a result there was a 10 year struggle to prevent gold mining before Kakadu was eventually extended in 1991. This area has a special significance for me as I was part of that campaign, for the three years, when I lived in Darwin. For a week in February 1988, Richard Ledgar, another local, Scott Wootten, and I sat on BHP’s drill rig and loader at the exploration site at Coronation Hill to highlight the illegal nature of the exploration permit.

As we drive towards Gunlom the butterfly wings start beating again. Kaylee comments that she has heard an odd noise under the vehicle but, in our desire to avoid disaster, we all rush to reassure each other that chaos is not about to befall us again. Along the way to Gunlom we pull in for a short walk up a gorge to a another waterfall.

After a quick leg stretch we are getting into the car and Jill notices a bit of metal hanging down beneath the car. We check it out. The metal plate that protects the underside of the radiator has buckled. Not much we can do. But Jill, decides on immediate remedial action and “deliberately” removes the loose metal plate by backing over the largest rock in the car park. That fixed it. No more loose metal. We pick it up and chuck it in the back of the Nissan. As we are driving to Gunlom, Jill comments once again on the spongy brakes.

We arrive at Gunlom at lunchtime and after a quick lunch head straight for the plunge pool for a swim. There are about 10 people swimming and a conversation ensues about water temperatures at various beaches including WA.

This leads onto the the issue of WA shark attacks at which point I politely point out that the WA Government’s policy, which advocates killing sharks, could only have been designed by a bunch of ignorant, ill-informed fuckwit bogans. The man on my right demurs and a conversation ensues in which it turns out our fellow tourist believes that anything that threatens human life should be exterminated, including all crocodiles.

I refrain from telling him that he is Richard Head or pointing out that his knowledge of ecology could fit into a box of matches, so peace is restored.

We are standing around after swimming and chaos theory activates for the fourth time. A passing tourist tells us he has noted a leak near the rear passenger wheel. He thinks it might be transmission fluid. We check it out and it is clearly a brake line issue. At this point there is no mechanic, no phone line, internet or mobile reception, so we cannot call anyone to get it fixed.

The four of us enter bush mechanic mode. This is a state of delusion in which all Australians apparently know everything about repairing cars and are able to undertake that repair with bog, fencing wire and cable ties. It appears the join between the metal brake line and the rubber brake line is leaking. We opt for a bodgy repair using two pack bog which we borrow from our neighbours. If we can slow or stop the leak we figure we can get to Pine Creek on the spare lot of brake fluid we have purchased from the campground caretaker

Eventually Roger locates the exact source of the leak which is a crack on the upper side of the brake line. The bog will clearly not work. We now need to find something to bind the pipe. It must be non-porous, highly flexible and resistant to break fluid.

We debate where to find this magical repair material. Eventually Jill suggests dental floss. The brains trust considers. It’s a wax coated nylon, thin and flexible. Perfect. Roger and Jill go to work and, in an hour, the brake line is perfectly bodgied with dental floss and white cable ties. The white cable ties are chosed, of course, to coordinate with the dental floss. It is another victory for Australia’s bush mechanics, albeit one that is far from perfect – the fluid is still leaking but more slowly than before.

The following morning we leave Gunlom. Roger is on the wheel and I am on the handbrake. We make haste slowly. The process is that at each creek crossing Roger slows the car with the gears and where necessary I add extra braking with the park brake. We try to avoid doing doughnuts (handbrake turns), wherever possible, but soon the excitement is getting too much for us and Roger and I decide to form a rally driving team on our return to civilisation.

At 10 am we arrive in Pine Creek sans accidents. I call Nathan the company owner and explain the dilemma. There is nowhere in Pine Creek (a town comprising one horse and a pub) where we can get the brake lines fixed and we cannot buy more brake fluid to replenish our supply. Nathan cannot send a replacement vehicle because he is not allowed to risk the safety of his mechanic who would need to return to Darwin in our dodgy vehicle.  But, for us it’s ok to drive on. No worries. Let us travel, sans brakes, to Katherine where we can get the brakes repaired. Boldly we press on using our patented gears and handbrake technique.

Roger and I are bonding nicely and we decide, in addition to our rally driving venture, to form a band based on our shared knowledge of Patti Smith and the Grateful Dead. The conversation mutates into one about road trips and I reveal that, in 1992/3, I toured the US, Canada and Mexico in an $1100 blue and white Kombi purchased in Oregon and equipped with everything a person could wish for; namely a reconditioned engine and a Grateful Dead sticker. Could any human being be more cool?

Finally we roll into Katherine and overshoot our designated mechanic when the gear/handbrake stop is not effectively coordinated. By the time we eventually stop we are in downtown Katherine where, cleverly avoiding an oncoming road train with an extra notch on the handbrake, Roger and I drop off Kaylee and Jill at the Coffee Club.

The Bundagen/Byron Rally Drivers Assocation then manages to turn around and drop the vehicle off at the mechanics. At this point we have no prognosis on the recovery of our vehicle which we have named Beyonce.

In the absence of any future plans other than an indefinite stay in Katherine town, a place which would feature only one star on any reputable trip advisor, we decide to drown our sorrows with alcohol. We ask a local shopkeeper which is the best pub. She wouldn’t recommend any. I translate for Jill and Kaylee. She means we have a chance of encountering Aborigines in them which, apparently, makes them undesirable destinations. It appears the RSL is the drinking hole of choice for the colonial white population. Absent other recommendations we decamp for the RSL.

Wandering the streets of Katherine while Roger goes to check up on the vehicle, we are hailed by a passing motorist. She is worried that we appear lost and has seen a group of blackfellas approaching. Our safety is of concern, apparently. She is extremely friendly and offers us a lift to the RSL but her attitude epitomises the state of race relations in Katherine which veers between fear, distrust, contempt and pure racism and hostility.

At the RSL we must remove our hats…it’s important, apparently, to respect dead people but not the living ancestors of this ancient continent’s original inhabitants.

We settle in for a stay in Katherine, which remains the shit hole it always has been.