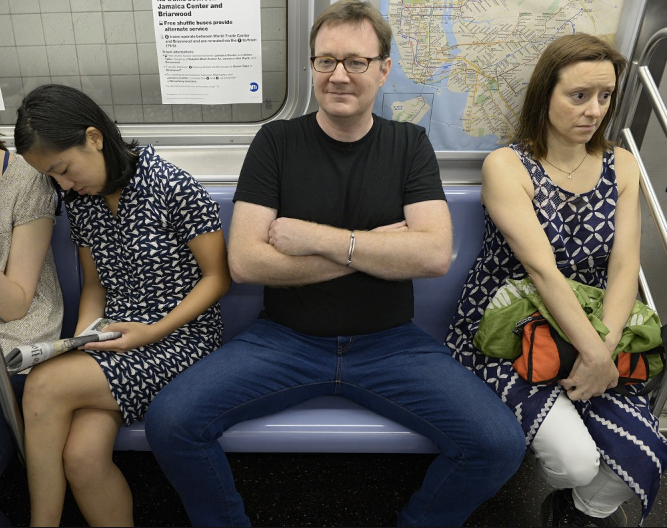 An observation on train travel in Europe (and elsewhere)

Man spreading; it’s just not a thing you see. It’s a physical and physiological thing.

Note: for those who have (a) been on Mars for a while; or (b) Not read anything on Facebook, man-spreading is the practice of men sitting with their legs wide apart forcing their neighbour (esp. if female, since two males will have a man-spreading competition) to sit on the remaining 10 centimetres of seat.

Now, I have to admit, that generally I don’t give a lot of thought to testicles, scrotal sacks and penises. They’re just there – but not high on my list of things that I think about on a day to day or hour to hour basis.

Now that may be different for male 20 years olds; I just can’t remember back that far. But generally, if I’m thinking about bodies, or body parts, (and heaven forbid I’d be so shallow) they tend to be ones that are not that similar to mine.

However I did note, recently, that several female friends and acquaintances, of my knowledge, were having a fairly major whinge, on Facebook, about man-spreading, especially in the confined spaces of trains, buses, planes etc. Being protective of my life and limb, I said nothing. But now that I’m safely on the other side of the world…..

Generally these complaints fall in the same category as mansplaining, talking over the top of women, not putting the toilet seat down, hairs in bathroom sink, sexism, misogyny and a multitude of other well-known male sins, none of which I ascribe or subscribe to, although I know at least one person who would disagree with my claim on item 2, above.

I’ve just spent the equivalent of about three complete days travelling on trains and trams around Europe, which has given me plenty of time to note the practice of man-spreading, it’s prevalence and distribution. Not forgetting that I may have my own personal man-spreading practice (limited but no doubt extant).

It’s like this you see…..if you are a woman (and making no other general observations about the trials, tribulations or pleasures of female body parts), you have that nice neat vagina down there tucked neatly and quietly between your legs. No gross sausage like impediments to sitting down, no big, flappy hairy scrotums that get larger and floppier the hotter the weather and no delicate, sensitive balls flapping around inside that scrotum.

Now when it gets hot, several things happen. All of those protuberant, sweaty, bulging, jutting, swelling excrescences get hotter, sticker and flappier. Physiologically male humans are programmed to do several things (1) keep your testicles cool because this will produce better sperm; of course it’s a moot point if this is a good thing but you don’t argue with a few hundred thousand years of evolution (2) As with women, try and get comfortable (3) reduce the possibility of pain due to squashed testicles.

Clearly it’s common sense that if you had a large (or even a small) dildo tucked between your legs that you would feel inclined to keep your legs apart (though I guess I shouldn’t speak for women). Similarly if it’s a hot day and your scrotum has expanded into a sticky sheet of something that resembles a cross between fly paper, honey and super-glue and has a strong desire to spread itself across your entire upper leg in an attempt to keep itself, and it’s allegedly precious cargo, cool, then the average male will have a strong desire to part his legs. It’s physiological.

I have noted, in my travels, though haven’t actually kept a man-spreading incidence diary that the hotter the weather and the greater the lack of air conditioning on the train, the greater the prevalence of man-spreading. I assert, without controls, that there is a causal effect here. Part of the problem is that it is precisely on such days that the average woman doesn’t want some sweaty man jamming his leg up against said female leg (not that it was said earlier).

Now, of course, those complaining about man-spreading are the same people complaining about men manipulating the family jewels in public either by pulling at them with their hands (regardless of whether the hands are inside or outside of the trousers). But the reasons are the same. If you are walking along on a hot day and two square metres of scrotal sack has adhered to your upper legs, you have a strong desire to remove it from that area so that you can (a) walk and (b) feel normal.

So next time you see a man, man-spreading, don’t complain, take action to remedy the situation. If equipped with ice, offer him three ice cubes, one for each testicle and a spare one for the scrotal sack.

Failing this you could just dive in and with a single movement plunge your hands inside his trousers and liberate his legs from the enveloping octopus of the scrotal sack.

Then leaning back say “Now will you put your legs together”. He will have no excuse. And probably no complaint.

This is Part 4 of the blog series “97 Days Adrift in Europe”. Links to other episodes and related content can be found below: