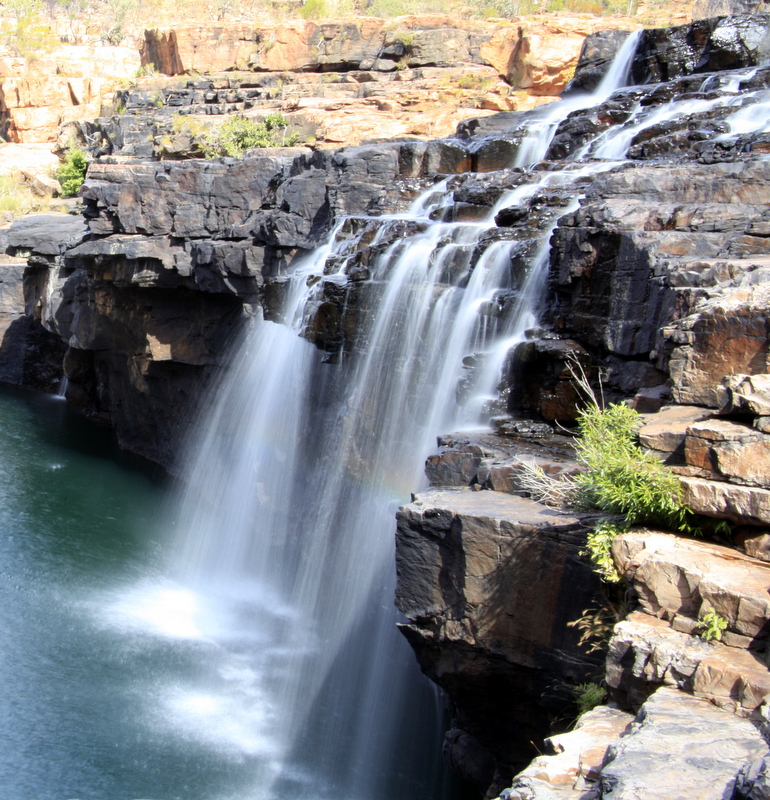 Having left Drysdale Station at around 2 pm, evening sees us at Mt Barnett roadhouse at 4.45pm. We will stay tonight at Manning Gorge campground but first we must annoy the storekeepers who are trying to close up by buying supplies. I sample the coffee which is passable but Kaylee declares the machine dirty and the coffee bitter. Having fuelled up we complete the final five kilometres to the dusty campground.

Despite deciding to take it in turns to pick the camp spot no one can resist being a back seat camp site selector. Roger is the first and gets a big fail since he suggests the first site he sees. It does not appear to be relevant to him that it is downwind of the septic, on the main traffic route to the toilets, about 10 metres from the generator and adjacent to a family that the Simpsons would call dysfunctional and covered with cattle droppings. He is barred from ever picking a campsite.

Subsequent discussion reveal Roger wishes to re-write history by claiming that his selection of the world’s worst camp site was just a joke or alternatively that it was an appropriate reaction to being pilloried for losing us the lakeside spot in Kununurra due to being insufficiently decisive.

Breakfast sees us up early for a walk to Manning Gorge. But first we all have to do stretches as we all have bad backs due to trying to carry the breakfast box which weighs about 20 kg more than it should as a result of the great Muesli war. No one can agree on what constitutes good muesli.

Kaylee refers to all raw muesli as ‘chook food’ and not one grain of uncooked muesli will ever pass her lips. I feel the opposite and in addition hate any muesli with sugar in it, Jill has some other bizarre preference that would certainly see her excommunicated from the Catholic Church and Roger makes a concoction from dried cattle dung and various other ingredients provided by a PNG witch doctor. Since we all need enough muesli to last three weeks, we have not only had to sacrifice half of all normal grocery supplies (no lindt balls) to accommodate the various types of muesli, but the payload of the breakfast box is roughly equivalent to a fully-laden 747.

In the morning we have to move the vehicle in order to meet Roger’s sunshine on solar panels quota. One of the great disadvantages of vehicles with tents on the roof is that, normally, if one stays at any campsite for more than a day, the tents have to be packed back down on the roof in order to go anywhere during the day. To avoid this inconvenience we decide, for the first time, to move the vehicle with the tents up, as we only require a re-location of about 30 metres.

Our plan is not revealed to Jill, who in blissful ignorance is doing her meditation session in her tent. She sits in her private nirvana listening to a meditation tape which, at the precise movement that the vehicle lurches into movement, is encouraging her to feel soft, relaxed and undisturbed and to the solid earth beneath her. As a result Jill experiences severe psychological trauma as a result of the disconnect between her spiritual state and the real world and has been suffering from an inability to distinguish between reality and fantasy every since. Given her historical obsession with photos of the most bizarre things we are fearful of what photos she may demand we stop to take in future.

The campground is a little run down because the caretaker has gone walkabout and the roadhouse is advertising for a new caretaker. Whoever installed the water supply tank appears to have been drunk at the time since it is perched precariously on a mound at an odd angle. The basins are either some form of art installation or are from last century judging by the crazy paving cracks in them. But to compensate we have the idiosyncray that, being on a cattle station, we may be joined for breakfast , at any time, by a passing herd of one-tonne herbivores.

Manning Gorge is an easy walk across stone country through a couple of stony creek gullies. The landscape is scattered with ancient boab trees, sprinkled with kapok and spinifex, the odd Kimberley Rose tree is a splash of red and everywhere echoes with the calls of finches and cockatoos of all varieties. At regular intervals the moving colour palette that is a rainbow bee-eater passes us by. While this Australian bush has a superficial similarity to savannah elsewhere, it has its own quite special spirit, variety, space and light that is found nowhere else in the world.

The gorge itself is a little mini-paradise of rock and cool water. Smaller in scale than many of the other gorges we have visited it is quite different than any other gorge we have visited and we spend the hottest part of the day cooling in the giant plunge pool and lounging under the trees on white sand.

In the late afternoon we walk back to camp in the company of a British woman, who is on a two year working holiday in Broome, and her visiting parents. She is also studying environmental sciences in Perth, while in Australia and is working as a tour guide on a pearl farm in Broome. Her parents are accidental tourists to the Kimberley since her mother made the booking while still in a post operative haze and thought she was going go Perth, not realising that the daughter had moved to Broome. As a result the winter holiday in South-West WA turned into a sub-tropical excursion to the Kimberley. So it goes.

On the second morning of our stay at Manning Gorge we decide that it is laundry day. It is about 100 metres from the vehicle to the ablution block. We do our laundry in relays since, with four of us, we need to do more than one load. This is accomplished by using the white washing up bowl. In the process we pass one caravan about six times with the bowl.

At one point Kaylee sees me approaching the toilet block as she is standing on the entry ramp to the womens’ toilets and, not having any free hands, proceeds to wave at me with the bowl by raising and lowering it above her head several times. On looking up she sees four elderly women, who are trying to exit the block, staring at her. Kaylee tries to explain but they all scurry off casting worried looks behind her.

On each trip a different person is carrying the bowl and the the female occupant of the caravan comments to Kaylee that there appears to be some form of strange ritual that requires the bowl to be passed to the next person before that person can participate.

Breakfast that morning has its normal bizarre rituals. Roger has a psychological block about the nuts he must put in his cereal each morning. We must endure him taking one nut at a time and biting it in four before placing it in his weird cereal concoction along with his dried PNG cow dung or whatever other ingredients he uses. This is because Garth once criticised him for being excessively noisy in the mornings (and presumably waking Garth at the late hour of 8 am, or similar) when he cut his (literal not euphemistic) nuts on a breadboard.

So Roger has taken to biting his nuts in four, however unpleasant that may sound. It’s unclear who is more psychologically disturbed, Garth because he can’t stand the sound of nuts being cut before midday or Roger because he feels unable to do something eminently reasonable for fear of annoying Garth.

Kaylee is unable to even descend for breakfast before she has frightened the entire neighbourhood. This involves finding every object she can in the tent and projecting them, at speed, into the surrounding biosphere. Anything within a 25 degree arc of the tent door is at risk of being hit by flying cups, rejected bread crusts and anything else deemed surplus to requirements. Surrounding campers may wonder why no one is occupying the only spot in the shade of the vehicle but the morning baseball pitching practice is the reason.

Following the morning ejections we have the descent. Placing ones head outside the tent and locating the steps on the stairs is, apparently, not an approved method of descending stairs safely. No, one must sit inside the tent and, projecting both legs externally, you then wave them around until you accidentally encounter a step with one leg.

Having done this you then place your second foot on top of the first foot so that you cannot more the first foot. The second foot cannot descend further since the placement of the first leg prevents the second leg being bent in order to lower the second foot. The head is still inside the tent. at this point. We then have the half-jump technique, in which both feet are rotated into something approaching a safe position. One can then descend further. This process takes approximately five minutes by which time Kaylee’s camping partners have managed to gather up the various projectiles and bits of projectiles (such as the cups which the handles have broken off). â€œOh, I thought they were indestructible!!â€

At this point we can all safely re-commence our breakfast since the end of the performance means we are no longer likely to choke on our various mueslis without choking to death with laughter (postscript: on reading this to Kaylee, she was so outraged by the alleged lies that she almost choked to death on her muesli. I, on the other had was so pleased at myself about my wit in writing about the morning performance, that I did not notice she was choking to death. I am currently once again in the doghouse. So it goes).

Jill, meanwhile, is preparing the five thermos flasks of tea she requires to survive the day. The circus really is in town.

Finally we are ready to leave around 8.30 am and we hit the road for Mornington.

2 thoughts on “Beating about the Bush, 60 Days in Northern Australia (Part 15 – Manning)”