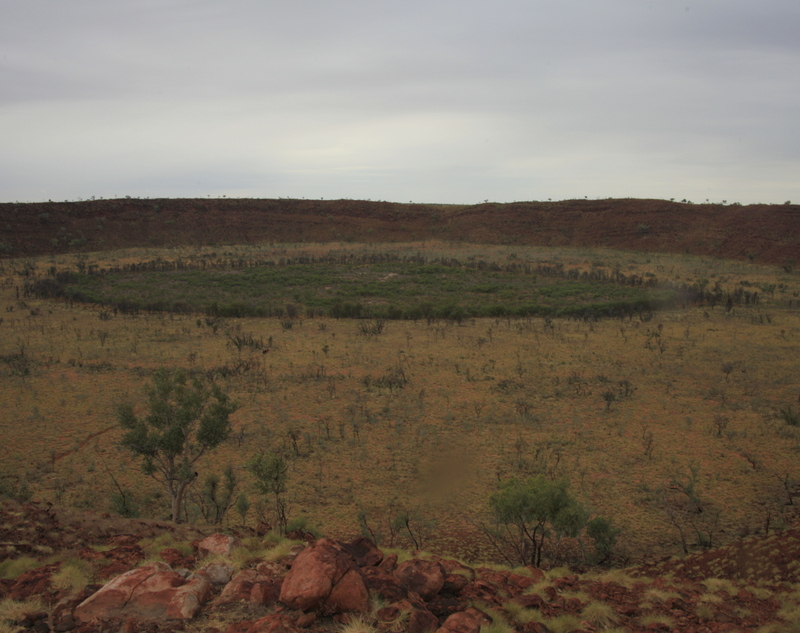 We are heading for Wolf Creek. Despite the film, we have been able to persuade Kaylee’s children that we unlikely to suffer an early death as a result of the visit.

Our final hours before leaving Halls Creek were filled with joy and redemption. Kaylee has given up on getting internet on her phone after the previous days traumatic call. But over dinner the evening before I decided to add another employment option to my expanding CV and have managed to find and fix the issue within 1 minute.

Two Optus employees and three Telstra employees were unable to surmise that an iPhone 4 has a function in which you can pre-set your data connection to a particular network. With my immense IT skills I was able to find that setting within a matter of seconds. Kaylee is now in my debt for to the tune of 10 chocolate Lindt balls.

In addition to the Telstra phone saga, two parcel sagas have resolved themselves. Bert, our Dutch cyclist, has received his parcel. We have all, independently bumped into him in the street and have had separate parcel conversations with him. He will now return to the Netherlands convinced that Australians have a very limited conversational repertoire. My parcel has re-materialised in Byron and has allegedly been returned to sender.

It’s unclear how Australia Post did this since the sender is actually in Melbourne, the intended recipient in Halls Creek and the return address given on the envelope is unoccupied. But full marks to Australia Post for creativity.

We do have to congratulate Australia Post on their boxes, however. In Katherine I purchased a box in which I had intended to pack my surplus and redundant items such as 4 android phone cables, jocks etc and mail them back home. But it turned out that it was cheaper to send them in two pre-paid plastic postal bags, so we ended up with one surplus box which, when flattened, it turns out, has extraordinary powers. It has served as a substitute tarpaulin, mechanics trolley, yoga mat, table mat, chopping board, sun-shade, fire-fanning device, pot-stand, among other uses. It is undoubtedly the best $3.50 I have ever spent and the flattened box is clearly so much more versatile than a flattened box from Woolworths.

On the road to Wolf Creek, I am cogitating about snakes and tenants. The tenants, in the downstairs flat, in Byron have emailed me and sent pictures showing a dead and bloodied brown snake on their bed. Indi had, apparently gone to embrace her partner, Josh, during the night and, instead, put her hand on a snake coiled around his neck.

Leaping from her bed and abandoning her intention to hug Josh she then grabbed a nearby knife (the flat is small and similarities to Fatal Attraction are just coincidental ) and beheaded the snake. At any rate, Indi has been sufficiently traumatised by the incident that she now wants to move out and break their lease. My pointing out the fact that they have consistently left their bedroom door open and that closing the screen door will prevent snakes entering in future are apparently unpersuasive. As election results show, logic will never overcome fear.

The road to Wolf Creek is also the Tanami Road which has a fearsome reputation for destroying vehicles. On the trip into Wolf Creek it is relatively smooth highway but presumably, given its reputation, it must deteriorate at some point. In the absence of anything dramatic about the road to talk about the conversation turns to the trip blog. I am somewhat mortified to find myself on the side of George Brandis, in arguing that I should be free to be entirely bigoted about anything that I feel like being bigoted about, and that vilification of my fellow-travellers is justified poetic license.

Still, I think, I am defending free speech. The three fascist defenders of censorship, in the car, feel that the blog should somehow reflect truth and reality whereas I suggest, in the spirit of Rupert Murdoch that you should not let the facts get in the way of a good story. The three fascists offer that in the absence of truth, justice and the Australian way, they may refuse to participate in the blog and will with-hold circulation to their friends. But I have already pirated all the necessary email addresses so their arguments fall on deaf ears.

At this point the conversation deteriorates further. We have side-tracked into discussions about population and the other two defenders of censorship have, according to Kaylee, entirely misrepresented her views on population.

When I joke that, based on her defending having had three children, there is clearly no relationship between population and fornication, something is lost in translation. Kaylee and I are in imminent danger of separation. Jill, on the other hand, is happy about something Roger has said to her and offers to re-marry him.

This subsequently turns out to be a shallow and superficial offer since, judging by Jill’s offer to marry me when I bring her tea in bed, in appears that Jill will offer herself to any man bearing agreement or gifts. As a postscript, Roger confirms this tendency, since he notes that Jill has offered herself to Garth, Hugh, Megan and Georgie and Margie at different times, in return for tea. A woman of Catholic tastes.

We arrive at Wolf Creek. It is just this side of freezing. A wind is blowing from somewhere near Macquarie Island. We rug up and ascend the 60 metres to the rim of the crater. The pictures of the crater do not do it justice. As one descends into the crater, one progressively enters a little oasis. The centre appears to have almost permanent water and it is an oasis of plant life and birds. The plant life is quite different because as the moisture evaporates it makes the area more saline and the plants in the middle must be salt tolerant.

Most of the crater has been filled by sand and what was originally 160 metres deep is now only around 60 metres deep. The sand blows in off the Tanami and, if you walk around the rim (only Roger is energetic enough to do this and he reports back) on the side facing the Tanami the sand is only about two metres from the top of the rim. Eventually the sand will fill the crater and it will disappear.

Our trip to Wolf Creek is over but we stop for lunch nearby. Roger and Kaylee disagree over the use of meths plus water in Kaylee’s trangia. Kaylee clearly has a view that Roger is very similar to climate deniers in that she has tangible evidence of the beneficial of adding water to meths but Roger is not prepared to accept scientific fact.

The motel is significantly better than it appears from the outside and has been completely and tastefully renovated. It also is an important stop for Grey Nomads since the operation of the coded locks on the room doors require a level of intelligence or memory which is clearly superior to mine. It is an exercise in mental agility which, no doubt, is intended to slow one’s decline into senility. My companions, far from assisting me to get in to my room, simply enjoy my intellectual inability to manage a simple memory task.

We have dinner at Russian Jack’s the restaurant attached to the motel. The dÃ©cor is modern and decorated with images of various film actors (sometimes referred to as â€œstarsâ€). The food is good and the service is excellent. Who needs gorges?

Other hidden gems of Halls Creek include a display at the IGA promoting literacy and numeracy. One gets the impression, maybe wrongly, that the town is a relatively cohesive community.

7 thoughts on “Beating About the Bush, 60 Days in Northern Australia (Part 8 – Wolf Creek)”