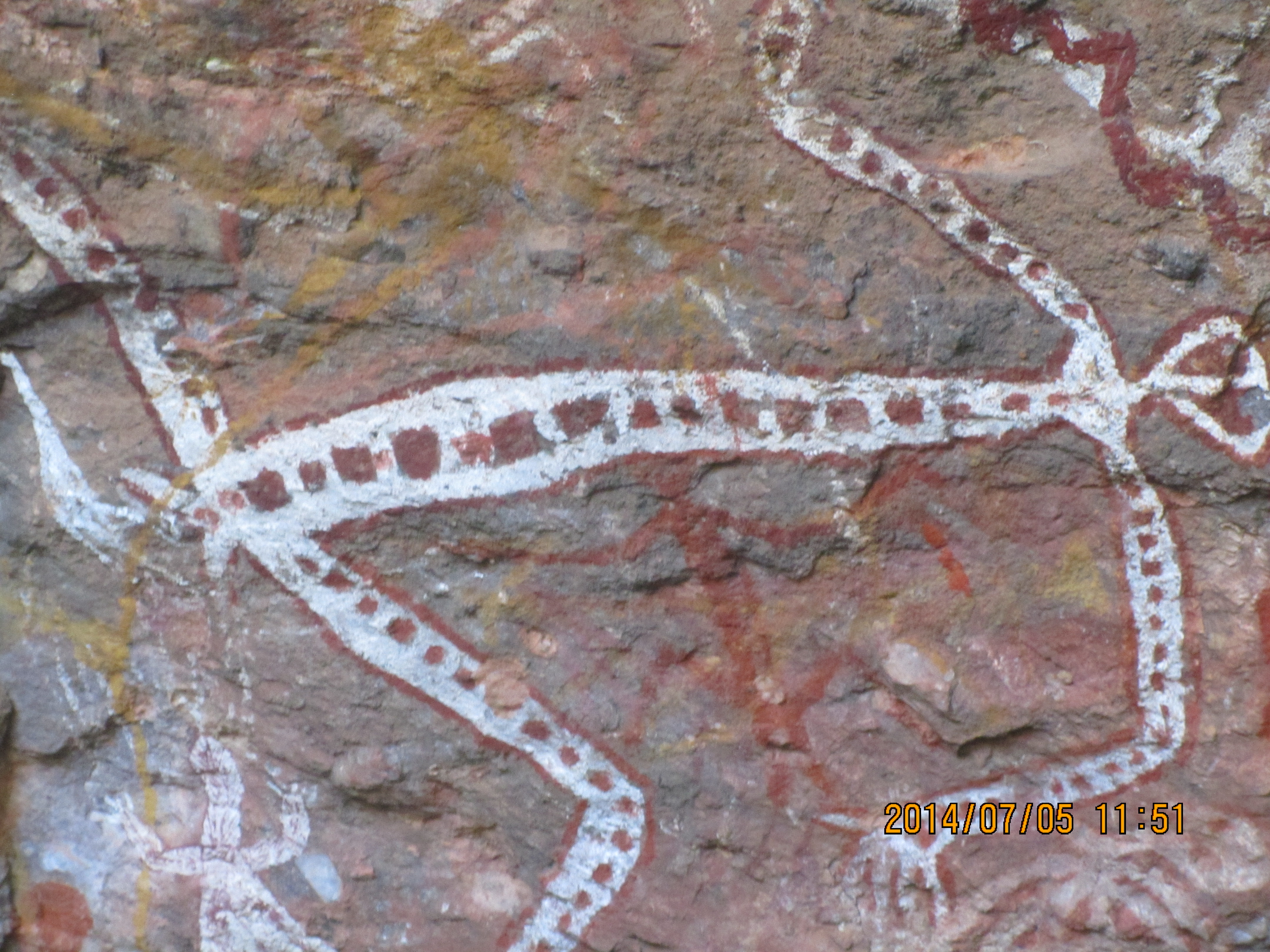 After departing Twin Falls, we head for Nouglangie Rock. As we approach the Kakadu Highway, the main road between Pine Creek and Jabiru, Kaylee complains about the brakes, they are spongy and it takes a while to stop. But we think maybe it is just dust or water in the brakes. But, hey, there isn’t much to hit out here so who cares.

The car park is packed. It is a chaos of buses, cars and a parade of 4WDs in all shapes and sizes. Two rangers are checking park entry tickets. They are being harangued by a French man in his 50s who appears not to understand that it is not the rangers’ fault that he is apparently functionality illiterate (at least in English) and cannot understand signs with the simple words “park entry permit required”. I wish I had a baguette and I would stuff it somewhere he deserved to receive it.

It is the antipodean version of my experience in France where ignorant English speakers would behave like ill-mannered louts if someone couldn’t speak English. First ask your question. If you don’t get the answer you want repeat the question, just louder until you are shouting. I Always felt like I should hand them the quotation that says “the definition of stupidity is repeating the same action and expecting a different outcome”.

We do a lazy tour of Nourlangie, admiring some of the world’s finest indigenous rock art, and then climb to the lookout. We wonder why the parks service still insists on retaining signs calling it Nourlangie when the interpretive signs clearly say that the traditional owners want it renamed with its traditional name. Renaming would have the additional advantage that a large proportion of visitors would no longer be able to find it and would make the visit of the remainder much more pleasant.

Most of the visitors are blissfully ignorant that if our Governments, of both political persuasions, had got their way, Nourlangie Rock would have been blessed with the sound and dust of a proposed uranium mine only a couple of kilometres distant.

The proposed Koongarra mine lease was excised from the park back when it was established in the 1970s and was only added to the park this year due to the persistent opposition of the Aboriginal traditional owners to mining at the location.

Lunch brings us to Jabiru, the mining town created for the Ranger uranium mine. It is a little oasis of neo-colonial white development on Aboriginal land. The Ranger mining lease existed before the park was created and prior to land rights, so traditional owners had no right to veto it, even had they wanted to.

Tidy quarter acre blocks bake in the sun, each with their ugly brick veneer home. In common with most communities in the NT, Jabiru has a major drinking and domestic violence problem.

For white people those social problems are hidden behind the neat facades of modern Australia, whereas for the black community the issues with alcohol and violence are played out on the streets. This means that society can look down on Aboriginal people as being hopeless drunks while pretending their own issues don’t exist.

Ranger has been operating for about 35 years. It is a model of mismanagement, regularly enduring accidents, leaks of contaminated water and similar malfunctions. But neither Federal nor NT Governments really care since both are client states of the mining industry. So Ranger which should have been closed years ago goes on blithely.

Our party of four continue on our un-planned way. Even though we plan nothing we still operate more smoothly than the Ranger mine.

We have forgotten that it is Saturday, so our planned shopping expedition suffers credit card interruptus because the supermarket closes at 3 pm. As a result we are forced to decamp sans the espresso maker I planned to buy. Mawson was forced to eat huskies and I shall be forced to drink earl grey. In fact I shall apparently be forced to drink it very often.

So far we are two days behind schedule, solely and only because Jill insists on stopping for tea about every 17 minutes. Few first world problems could be more daunting than earl grey tea every 17 minutes and no coffee.

Next stop is Ubirr. The road, which was a windy dirt road of many creek crossings, often closed in wet season, is now sealed. The crossing of Magela Creek, once  an expendition in its own right, is now a routine exercise. Many of the side roads down which one could venture to the flood plain have been closed and locked with gates. The camp ground which used to border the East Alligator is now set back 3 kilometres from it and the Border store which was once an archetypal remote store now has a Thai restaurant.

Ubirr is not only a major rock art site but also one of the best places in the park to experience the interaction of flood plain and stone country. I have visited it more than 20 times over the years to experience the sublime sunsets from the top of the rock and the unequalled sense of the spiritual.

Some of that remains although the numbers watching the sunset have increased more than 10 fold and there are more than 200 people enjoying the Kakadu equivalent of Uluru’s sunset strip when we arrive.

Jill is so seduced by the elixir of sunset and flood that, despite her alleged fear of heights, she thinks she can fly and edges ever closer the the rock edge much to Kaylee’s consternation, who as a result has her  experience of the tranquility of Ubirr severely undermined.

Dinner time brings us to the Border Store, which is arguably Australia’s most remote Thai restaurant. We eat duck curry surrounded by $1000 art works all of which lean crazily on bits of wire. The food and coffee are good. But there is no dessert…Kaylee is devastated and she suffers dessert withdrawal symptoms.

This appears to which lead some sort of memory loss over coming days…such as thinking she has lost her phone which she plugged into the charger only 30 seconds ago and going for a shower with no soap, towel, shampoo, or change of clothes, but taking her phone as a substitute for those items, meaning she has to do another 100 metre return trip to the showers.

Before leaving the Ubirr area we embark on a short walk around the rock country near the East Alligator River. As with almost of Kakadu there is rock art on most of the rock outcrops. Crane your head and some figure or creature appears; the entire landscape is peopled by the spirits of 40,000 years of occupation.

Finally we head down to Cahills Crossing where one crosses the East Alligator from Kakadu into Arnhem Land. The crossing is a sort of mythical divide between Aboriginal Arnhem Land and the rest of Australia and is impassable in the wet.

The occasional person has become crocodile bait here. In 1987, when I was working in the park, a local miner imbued with alcohol immunity waded into the downstream side of the crossing to fish one evening, despite warnings of sightings of a large black crocodile. He was reported to have said that he had been fishing there for 15 years and had never had a problem. Minutes later he was dead. So it goes.

Most years people get caught out by a sudden onset of the wet and get trapped on one side or the other; in 1988 a sudden wet caught dozens of vehicles on the Arnhem Land side and the Gagadju Association did a nice business towing vehicles across using its grader. Cost $200 a pop.