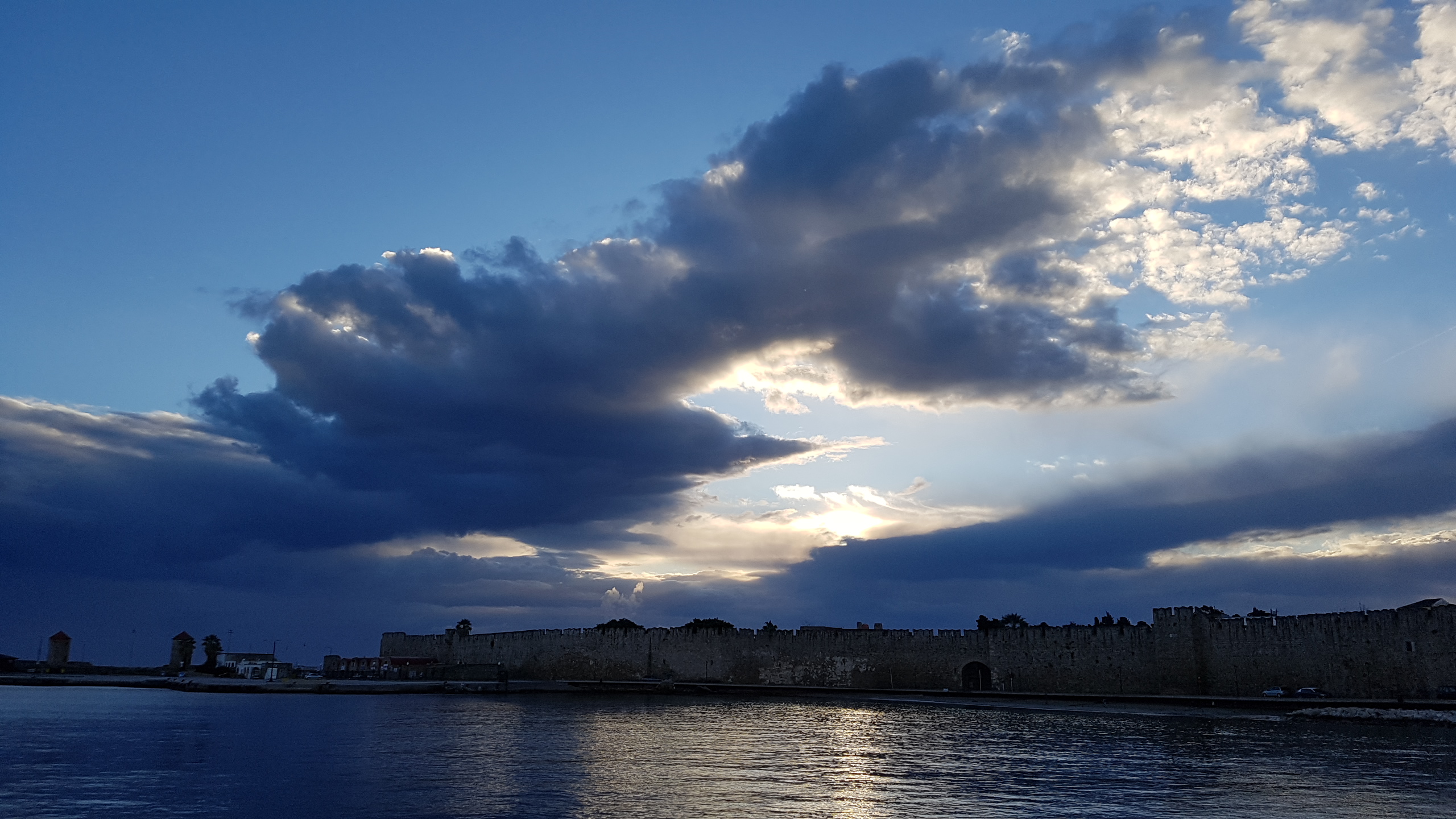 I arrive in Rhodes on a slow winter’s day. The 60 kilometre journey from Fethiye, in Turkey, by hydrofoil has taken twice as long as expected due to heavy weather. The Rhodians are fortunate because, had I decided to behave like almost everyone else who has arrived for the last couple of thousand years, I would have invaded it.

As it is, looking at Rhodian history, it seems that it was a bit like a conga line of uninvited dinner guests. They arrived sans wine or food, hung around for a while, behaving unpleasantly, living off the hosts and then leaving when someone even more unpleasant arrived. Occasionally unable to find a better dinner party they’d return and gatecrash a second time.

This unparalleled complexity of Rhodian history has left an 80 kilometre long island full of rich mixture of fabulous archeological sites from a dazzling array of cultures all within a days drive.

Rhodes was inhabited from Neolithic times but around the 16th century BC, the Minoans came to Rhodes followed by the Mycenaeans the following century.

Later Greek mythology recalled a Rhodian race called the Telchines and associated the island of Rhodes with Danaus; it was sometimes nicknamed Telchinis.

Then from around 700 BC the arrival of uninvited dinner guests accelerated starting with the Dorians for pre-dinner drinks. The Persians arrived for aperitifs about 460 BC but left when the Greeks arrived in time for hor d’oeuvres in 458 BC. In 357 BC, the Carians turned up from Turkey, to try and get some of the hors d’oeuvres, but left when the Persians returned in 340 BC for soup. The Persians clearly didn’t get along with the Hellenes because they left again when the Macedonians returned.

By this time we are on to main course and all the uninvited guests have left and the Rhodians and their invited guests (the Romans) stayed and enjoyed themselves until the Arabs and Genoese started coming around and dropping in for the odd year or two, for a drink. Finally the Knights Hospitallers turned up around 1310 AD, for dessert, followed by the Ottomans for coffee in 1522. In 1912 the Italians came for port and cigars and stayed until 1945 when the British arrived for a quick pre-bed time snack before finally handing the entire place to the Greeks in 1947. 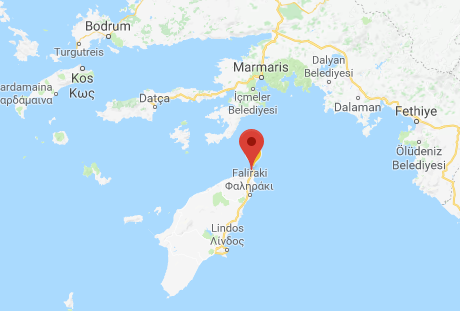 Most visitors I talked to seemed largely unaware of this history and for them Rhodes is just famous for the Colossus and for the fabulous medieval city left by the Knights Hospitallers of St John. Apart from that all they know is that it is just another Greek Island.

But Rhodes to the Greeks, (Rodi in Italian, Rodos in Turkish and Rodi in Ladino) is anything other than just another Greek Island. To begin with it’s also Turkish in the sense that it is one of the few remaining large Turkish communities in Greece. Around 2000 Muslim Turks live in Rhodes, a historical anomaly due to the fact that Rhodes was under Italian rule when the population exchange was done between Greece and Turkey in 1923. It also had one of the most vibrant Jewish communities in Europe until the Germans sent most of them, except a few dozen rescued by the Turkish Consul, to Auschwitz. 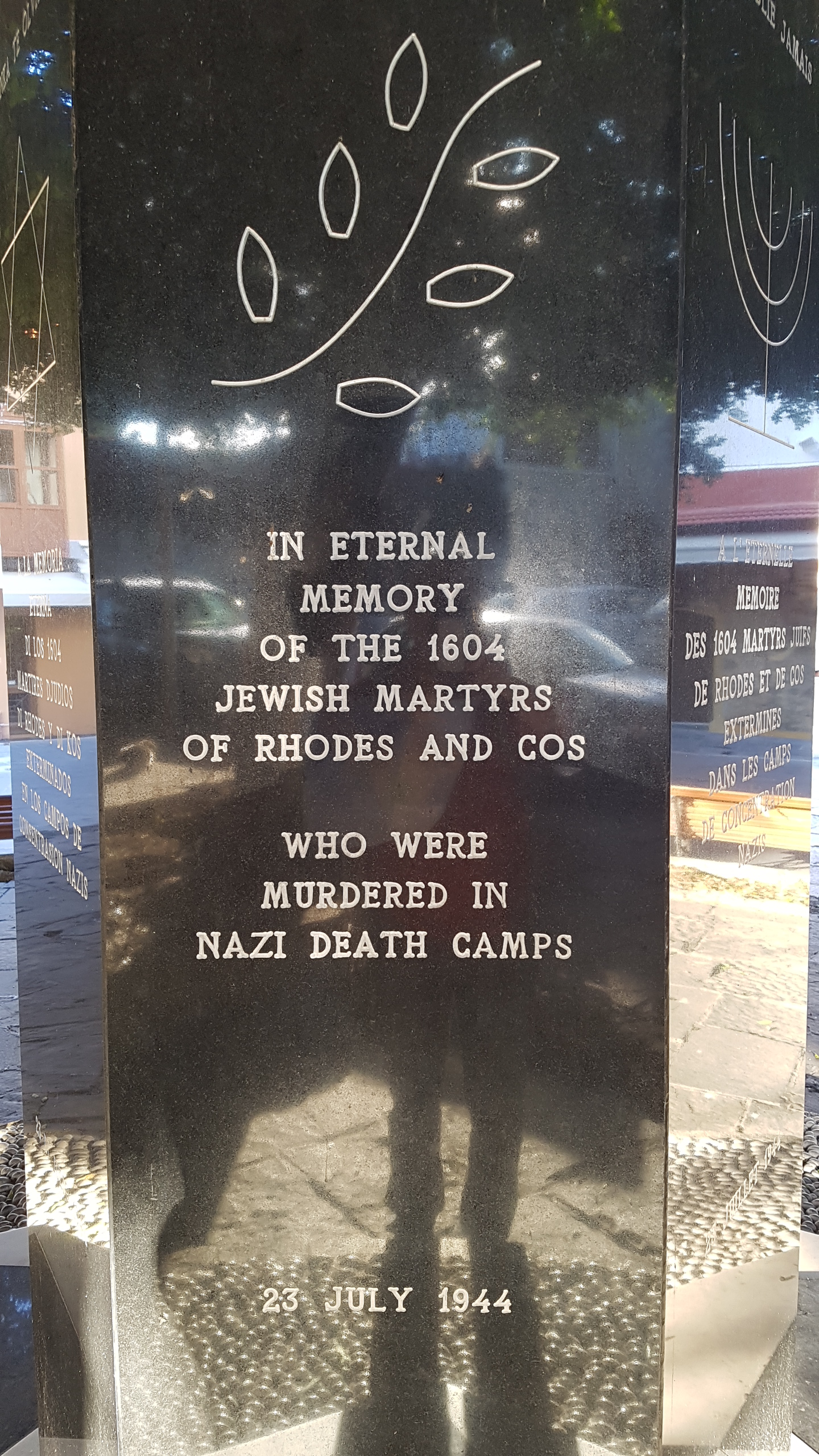 Memorial to members of the Jewish community murdered by the Nazis

The city of Rhodes is also the largest remaining intact medieval city in Europe, with the old city being a world heritage property. And like everywhere else in Europe if you visit in winter you can have it almost entirely to yourself with just the small disadvantage that three out of every four cafes, restaurants and bars are closed and that most museums and archaeological sites close at 3 pm.

Walk around and, generally, somewhere, there will be a gap in the fence, steps up the wall or a combination of both, thus inviting you to have a very personal, free and uncrowded tour,

Given that security costs money there is rarely security and, if there is and you are caught, indulge in the Gallic shrug and explain that you actually got locked in when the site closed. Regrettably if you are not prepared to take this risk and you arrive too late, well tough. And, yes, yes, we all know the “but what if everyone did that argument?”. Well they won’t.

A quick visit to a deserted Ialysos courtesy of dodgy fences

Time was, when arriving in a strange city, you’d simply jump in the nearest taxi go to your hotel, check in and sort yourself out. The hotel would have had a reception and someone waited for you to, at worst, let you in. Alternatively, you just stayed at one of a plethora of hostels which had 24 hour reception.

Today, however, in the epoch of mobiles and AirBnBs one may well arrive to a locked door and, in the event that you do not have a local sim card, you end of standing by the front door in a form of limbo. Do you wait and hope that someone turns up? Or leave and try and find a wifi connection? If so where? And can you justify investing in your 26th coffee of the day just to have a wifi connection? Or just go and get a coffee and hope someone turns up by the time you get back? If you go away for a coffee, will the host arrive and leave again before you return?

Normally, in these circumstances, it will start to get dark, the rain will start to come down, you will realise your parka is at the bottom of your pack under 10 other items. If you go for a coffee, the nearest cafe is closed and, if not, you only have a 100 Euro note to pay for a 2 Euro coffee.

By now your bad knee is hurting from walking around town past past ten closed cafes and, as you realise you are finally and completely lost, you notice standing, on the corner, in the shadows, a group of 5 large tattooed bikies. It’s no good appealing to God or Allah because you are an atheist and you prepare to hand over your computer, camera, wallet and passport. So, wishing for something good to happen, like the death of Donald Trump you walk on in hope past the bikies.

As you approach the only bad thing that happens is that you realise your prejudices and cowardice are as rank as the next persons, as one of the five heavily tattooed female soccer players greets you pleasantly in broken English…then as you turn the corner you see your AirBnB with the light streaming through the open door. Still, life was simpler when you either booked into the local Hilton or you couldn’t afford to travel at all.

There is little about Rhodes that is not to like. Stunning coastal scenery, friendly locals, one of the most beautiful medieval cities in the world, the three ancient Dorian/Roman cities of Lindos, Kamiros and Ialysos, plus an incredible mixture of Greek, Turkish/Ottoman and Jewish cultures, among others. Not counting of course the indelible traces of 200 years of occupation by the Crusaders.

A couple of hours to the south are the remains of two of the six great Doric cities, Lindos and Kamiros. Of the third Ialyssos, just above Rhodes City, little remains apart from a temple and some stairs and fortifications. All of these ancient sites sit in stunning locations above the water and for hundreds of years during the Dorian and Roman eras were the most important Rhodian cities.

A winter trip to Lindos down the highway takes just an hour, followed by a further fifteen minute walk from the empty car parks through the winding white-washed, deserted, streets of the modern day Greek city and up the ancient stairs to the fortress. This is a place of four ages, first the Dorians, then the Romans, the Crusaders in the form of the Knights Hospitallers and the modern Rhodians.

From here the inhabitants were masters of all they could survey and that, perched in their fortified eyrie, was a large slab of Rhodes.

Rhodes, though is far more than the grand gesture. The real beauty of the old city of Rhodes are hidden lanes, gardens, the lights, the fountains, the footpaths, the doors and steps and a myriad other bits of the city that in other places are simply sources of light or places to walk but in Rhodes are works of art.

Around the streets of Rhodes

The most famous building and street on Rhodes is, arguably, the Palace of the Hospitallers and its adjacent road. Certainly it and its surrounding defensive network of moats and walls are impressive and as the Ottomans found, initially, an attackers nightmare. But while it’s certainly worth investing time in visiting it, for me the surrounding laneways, alleys, ruins, mosques, synagogues and the hospital etc are equally if not more impressive.

The palace in Rhodes

One of the features of the palace are the mosaics, a number of which came from Roman ruins in Kos. In the absence of almost any interpretive signs – the Greek custodians, presumably, believing that if you don’t provide signs then visitors will be obliged to buy guidebooks – you are required to guess at the use of most parts of the building.

This includes guessing whether the mosaics were stolen from Kos by the Hospitallers (which given the propensity for the Catholic Church to steal most things it owns is highly likely), or later by the Italians who decided that they knew best what Rhodes should look like.

Mosaics in the Palace

The Hospitallers hung out in Rhodes for a couple of hundred years, having returned from killing Muslims on the crusades, and, following a four year campaign ending in 1310, they made Rhodes their headquarters and their private domain until evicted by the Ottomans. What goes around comes around. From there they went to Malta after their defeat by the Ottomans.

The Knights were structured into eight “Tongues” (languages) or Langues, one each for Crown of Aragon,  Auvergne,  Crown of Castile, Kingdom of England, France, Holy Roman Empire, Italy and Provence each of which occupied a property on the Street of the Hospitallers.

The Street of the Hospitallers

At the bottom of the Street of the Hospitallers is the famous hospital, now a museum. Here the victims of the church, the dead and wounded from numerous campaigns, were bought to recover or die having been sacrificed for God or King. The knights were well known for the medical practice, ironically enriched by their contacts with the Arabs, which significantly improved hygiene practices.

My departure took place under a beautiful winter sky heading out on the next stop on my mini circuit of southern Turkey and adjacent Greek islands. Next stop Kos, via Symi.

The complete archive of Rhodes images can be found below:

Images of Rhodes city and surrounds

Images of Ialysos and surrounds

Previous post: Ai am the Wei and the truth and the life -inside Ai Weiwei’s Istanbul exhibition.