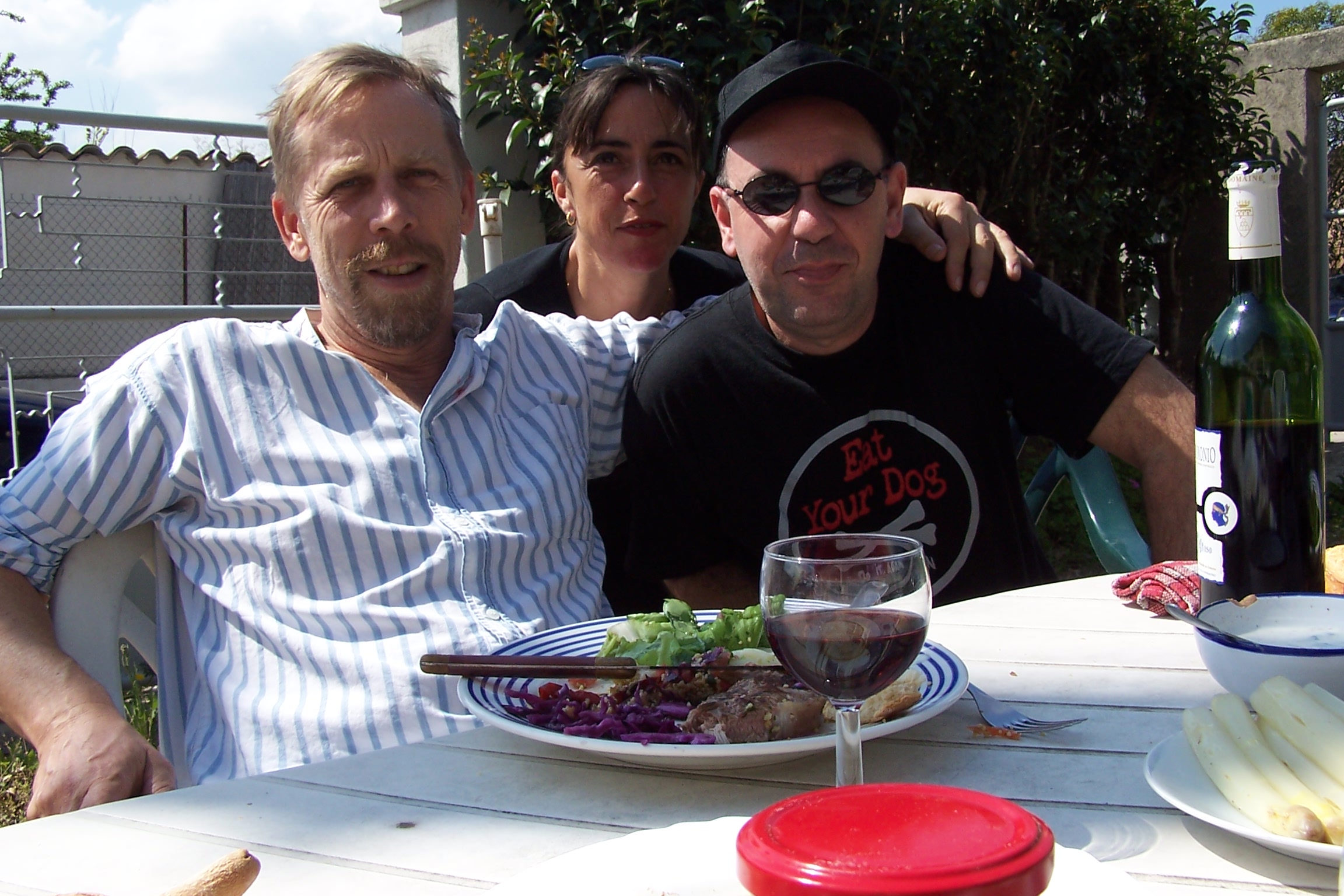 “Putain, he is a  pied noir, what can I expect. They are all machistes, they think the woman is their slave, like all men”

Nadine stares at me for support. We have had several political discussions about such issues and the attitudes of the Pied Noir (white French from Algeria). Bernard, her husband, being a Pied Noir.

Across the table Bernard sits slumped in his chair, his face a mixture of resignation and a beseeching invitation to me to come to his assistance in his hour of need. This is the twenty-third instalment in this discussion.

I look at Bernard and Nadine. At this point they are a bit like the archetypes of Men are from Mars and Women are from Venus and I decide to take decisive action.

Together at the Med

Isn’t that the mountain that Cezanne often painted? I say. I didn’t realise that you could see it from here.”

Both stare at me. This is betrayal of the highest order. For Nadine it is a political betrayal; one cannot be politically correct unless one is prepared to support her against the idleness of the Pied Noir and the general uselessness of all men around the house. For Bernard my failure to defend him deserves expulsion from the loyal society of Martians (Men). He is no doubt thinking that he will rescind his offer to record several CDs for me from his large CD collection.

Silence descends. A sullen fug in which the three of us are trapped. I ignore it, take another slice of bread and Camembert, top up my glass of excellent Bordeaux, refill my plate with chicken, salad and ratatouille and relax back in the Provençal sun. A few minutes and the sun, food and wine will have buried this discussion for a few more days.

Aix-en-Provence lies just a few kilometres from Marseilles separated by scattered suburbs. This is the heartland of Algerian immigration and of right wind reaction. My friends Nadine and Bernard, with whom I shared a week in Safari Cottages on Gili Air, in Lombok, are part of the political left. This is the usual scattering of leftists of all hues, who hate Le Pen and George Bush, but not as much as they hate the Trots, the Maoists and the Anarchists, of course.

Algeria and the issue of Les Corses (the Corsicans and their demand for independence) remain two of the popular topics around the dinner table especially since many of the often-assembled groups are either of Arab parentage or are Pieds Noirs. This is very important because when all else fails one can have a heated conversation about Algerian politics, involving the all-important element of personal abuse.

Lunch and dinner, in this company in Southern France, is dominated by politics, football, sex, and French culture. No one else has any culture, needless to say, and they all enjoy the Gandhi joke when he was allegedly asked: what do you think of American culture?and he allegedly answered “It would be a good idea” There are many versions of this statement of Ghandi’s and you can insert your preferred substitute for “American”, e.g., Western, British etc.

George Bush is an object of vilification and scorn, the US and Britain almost equally so.

The objections to the war on Afghanistan and to the simplistic idea that a war against terrorism could be won via a conventional military campaign, a view that has been frequently expressed in the pages of the Sydney Morning Herald, are echoed here, but more much strongly.

Australians and New Zealanders are relatively rare in this part of the country and are viewed as vaguely interesting. There are lots of Americans studying at the University but they are viewed as separatists who do not mix with the locals.

Bernard tells me that many of his friends express interest in visiting Australia but he is ambivalent about the attitudes of Australias to the French.

“But the Australians they hate us, no?? Ze bomb, Ze Rainbow Warrior. Ah putain. But yes we will beat you at ze rugby when ze Australians come to Marseilles in November. Ha we beat ze All Blacks in Marseilles last time and Zidane he will score four goals against the useless Australians when we play you at ze soccer in Melbourne”.

I assure him that this is not true, that Australians are all lovely people, who welcome foreigners with open arms (lovely rest homes in Manus, Christmas Island, Nauru etc). We love the French, thought the bomb was a great idea (saves on fishing boats and nets – just collect up all those dead fish). We never really liked the Rainbow Warrior, anyway, which is much better off as an artificial reef, non? And as for sport that we were all hoping that that nice Marie Jose Perec would beat Cathy Freeman at the Olympics in Sydney.

In the same way that Tasmanians, Queenslanders and West Australians, see themselves as different from other Australians, the southern French view themselves as a race apart from the frigid northerners. There are two types of French people they say, the German French (the northerners) and the Latin French (starting a couple of hundred kilometres south of Lyon). The former are the ones that every foreigner loves to hate, they say: “Tres froid, comme les Anglais” (very cold like the English).

It’s true that southern France resembles Spain, in many ways, more than northern France. Catalonia, at its height ruled large swathes of southern France and in some of the southern French towns there are bullrings and tapas. Just across the border from Spain, the siesta still rules and nothing much happens from 2 pm until 4.30 except food and sleep.

From Marseilles and Aix the landscapes of Cezanne dominate the country, including the famous mountain he painted so often. Cezanne grew up in Aix but there are none of his paintings here. The Aixoise thought that his painting was shit so they didn’t buy any. So you can follow the lovely Cezanne walk around ancient Aix, seeing where he lived, where he ate, where he tripped over and grazed his knee but want to see his painting? No chance, they’re all in Paris or New York.

Marseilles at one million people is France’s third largest city, Lyon, being the second largest. The Marseilleise are very proud of their traditions. Ah yes, they say, Paris was a village when Marseilles was already a city. And, of course, the national anthem comes from Marseilles and was adopted from the battle hymn of the Marseilles warriors who defeated and beheaded the king.

Aixois see themselves as being separate and different from the residents of Marseilles even though the two towns are only marginally separate. Aix is a university city of 100,000, and so several tens of thousands of its population are university students. Tiny streets and plazas full of street cafes dominate the entire city. The nightlife is vibrant, with all types of music including much African and South American music.

There are several salsa clubs in which one can pass the night watching videos of Cuban and Brasilian music and dancing the Salsa (or when you compare me with the Cubans and Brasilians, it is sadly, a pale imitation of the Salsa).

When one pauses between dances to prevent oneself from drowning in sweat, one can sip slowly on the single exorbitantly priced drink which is all one can afford (perhaps a Pina Colada) and marvel at the style and rhythm of the many north Africans in the club, who are clearly practising, judging by body position and movement, the vertical version of the two backed animal.

For me the next day (a long-long lunch in the Provence Countryside) brings more success than trying to dance the salsa. This is when, like all visitors to southern France, one must be initiated into the rites of Boule or Petanques.

For the uninitiated this involved tossing a very small ball, that no normal-sighted person can hope to see, and then trying (playing in two teams) to get your larger balls nearest to it. For each ball between the opposing team’s nearest ball and the target you get one point. First to thirteen points, two points clear, wins.

However this is not the main point of the game. The principal goal of the game is for every member of your team to give you (and, in turn, every other member of both your team and the oppositon team) very loud, very unnecessary and completely contradictory advice as to how you should throw your ball. Having given that advice, if it is not followed, it is your duty to comment on the parentage of said player or of his/her lack of sexual prowess.

Most importantly the period spent verbally abusing others must take up at least five times the actual time one spends actually playing the game. This allows plenty of time for drinking and for abusing the opposition and, in particular, for articulating the complete incompetence of their performance. The better the performance of ones opponents the louder you must sledge, especially if the opponents are winning.

Having been reluctantly accepted onto one of the teams (surely no Australian could play Petanque well?!!), I proceed to demonstrate that Australians can play just as well as the French. At no point in the game did my verbal abuse of the opposition ever let me down.

Despite a crushing defeat on the scoreboard (13-5), honour was upheld as our team clearly had the better insults. After all is the point is not to win but to beÂ more abusive than the opposition.