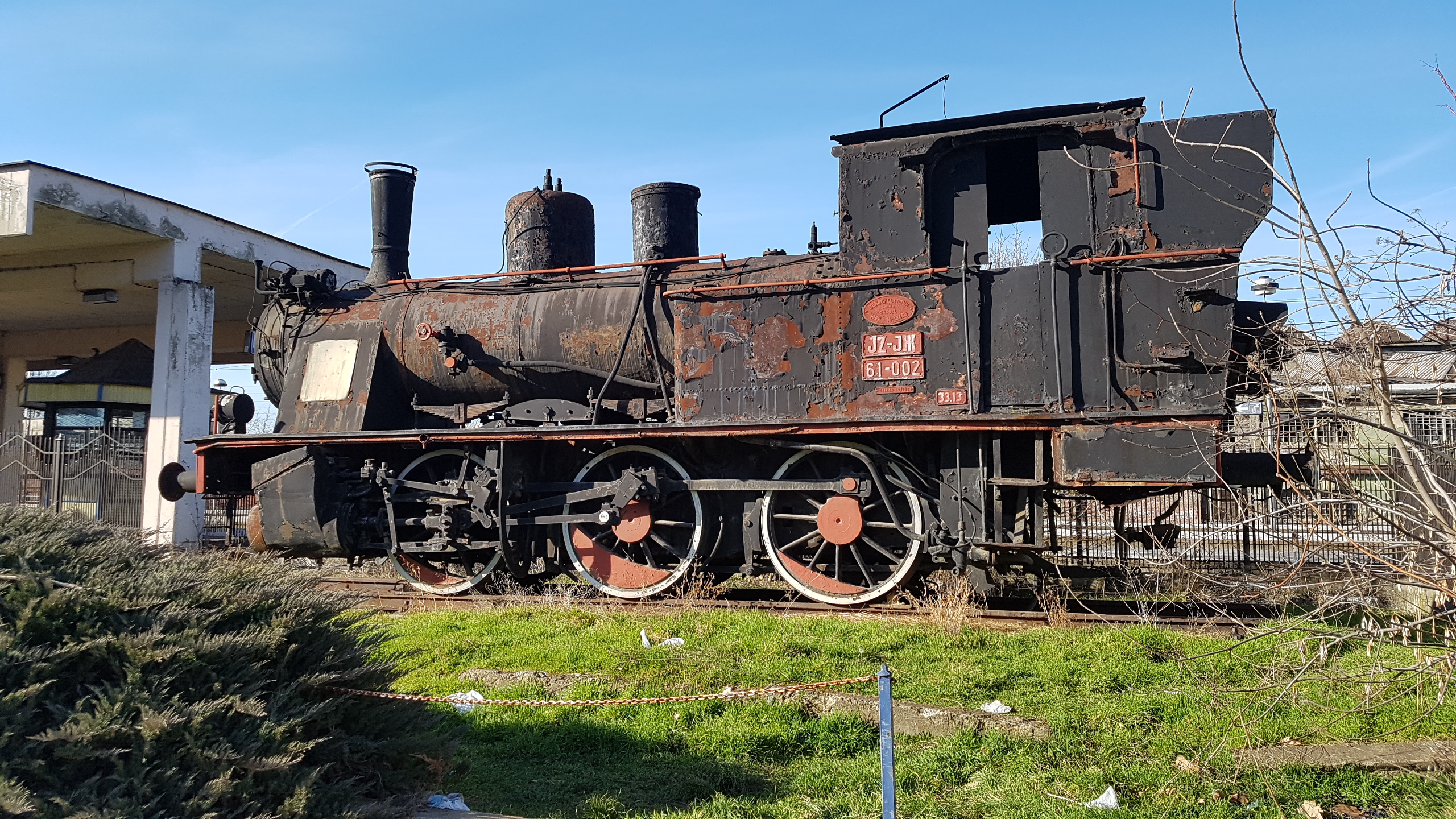 It is 392 kilometres from Sofia to Belgrade and another 600 kilometres from Belgrade to Vienna. From Vienna you are on the fast rail networks of western Europe but these first two legs of my journey are about 200 years in the past in terms of train technology years.

The trip from Sofia to Belgrade in particular, is the railway equivalent of slow boat up the Nile. The Nile slow boats are a sailing boat called a Felucca, a boat, incidentally, that I know well (see Sailing Like an Egyptian – slowly down the Nile).

These train services are so bad they make Australian trains look like the bullet train.

The “Avala”, the Vienna express, and the concrete something at Sofia station

This is serious regret country. Where you think “was this really a good idea to travel from Istanbul all the way to Malaga by train”. Even my fellow passengers look like refugees from some gulag in the east. Either exhausted, rough or disillusioned.

In other words this inter-city express would win a Boston Marathon but only by around half an hour. Or alternatively the marathoner could theoretically reach Belgrade only a few hours after the train if s/he could keep going – and the trip would probably be more comfortable than the train trip, since it seems that these trains were probably once used to torture their occupants via sleep deprivation. If you do accidentally fall asleep the lurching, bumping and grinding will have you on the deck in a matter of minutes.

There are, by my count 46 stops between the two cities which, if you work it out is one stop every 8.52 kilometres. Most of these stops, apparently, require that the driver or guard, possibly both, get off the train have a short winter holiday and then re-board before leaving the station. On average 0.75% of a person boards or descends at each stop.

From Belgrade to Vienna things decline further, other than the speed which is a little faster. We board the Vienna Express at Belgrade Station. The Vienna Express is likely the East European version of the Marrakesh Express of Crosby, Stills and Nash fame, but absent hippies, drugs and things of interest.

It consists of a single locomotive and carriage and an assortment of co-passengers that look as if they stepped off the set of Midnight Express. The Avala only travels as far as Nis, where we change trains to a the more modern version of our Felucca. To ensure that we are not, however fooled by this impression of modernity, our express journey includes an unscheduled one hour stop in the Serbian countryside just after we have changed trains.

Here we wait in a small town with several other trains while they repair the railway tracks. Apparently they started work on the track the night before and forgot that trains were supposed to run on it the following day (or something like that given that my Serbian was not really up to interpreting the announcement other than it was a track problem). It does have the advantage that we are all able to take a short tour of the village, have a smoke, get extra supplies, or whatever takes our fancy, etc.

The average passenger is also psychologically traumatised since the train, from Belgrade is called the Avala which sounds like it should be some slick modern train. In my brain it sounds a bit like Areva which is, of course, the French company which builds nuclear reactors. It’s the power of association. Even though nuclear reactor are themselves outdated 60’s technology.

The psychological dissonance suffered by the passengers who believe they will be boarding something, the name of which sounds like the TGV, but which operates like the train in the accompanying photo (below, at Nis station) is a traumatic experience for which the railways would be sued were we in the US.

For the first world, western European/Australian, traveller the journey through the Serbian countryside is, in itself, also a blast from the past in various senses.

Even the names of the towns such as Dimitrovgrad, where we stop on the Bulgarian/Serbian border, are reminiscent, to my ears, of the greyness of the planned cities of the Soviet Union. And, as it turns out Dimitrovgrad was exactly that. Here light grey concrete, blends nicely with dark grey concrete in an artistic panorama reminiscent of Peter Dutton’s mind. Devoid of anything pleasant.

Here, we have a Bulgarian/Serbian repetition of my experience of crossing the border from Turkey into Bulgaria which you can read about here. Multiple border guards mount the train and make off with our passports to perform some secret police ritual in the offices of the adjacent buildings. Satisfied that any potential Syrian refugees are not, in fact, on board the train but are back in Ghouta enjoying being murdered by the Assad regime, we are allowed to proceed.

Later we will have a similar border experience at Subotica on Hungarian border, a border which is replete with a 2.5 metre, razor-wire-topped anti-refugee fence. This stop involves not just the standard passport control but also involves the border police getting on their hands and knees and searching under each seat bench for errant refugees.

Despite its shortcomings the trip is scenically quite spectacular as we pass along the Danube River valley gorges near Gradite. The Danube swollen by full floodwaters from the recent storms surges through the gorges past the cliffside forming a spectacular backdrop to the rail trip.

We also pass a plethora of small towns each with its own unique railway building and railway staff who perform the railway rituals that seem to come with the territory in most of the Balkans and eastern Europe. These involve a variety of uniforms, strange hand signals, flag performances and assaults on the train using strange looking hammers.

Many of the cities are a different story, especially along the train lines. Here, as in every country in the world, seem to be the areas that are full of the most impoverished looking, dingy parts of each city.

This is particularly so in many of the major cities of Eastern Europe where every passing kilometre is littered with dead trains, carriages and buildings but, worse, sometimes for tens of kilometres, are ground zero for seemingly uncontrolled rubbish dumping as far as the eye can see.

Piles and piles of household, industrial and building waste, much of it plastic. Whether it is the absence of recycling facilities, an historical or current disdain for the environment, the absence of tipping facilities or the cost of disposing of waste it leaves an unpleasant vision of a form of industrialised hell.

Rubbish central. For miles. As far as the eye can see. Here near Belgrade.

As we near Belgrade our train comes to another halt. After half an hour we are informed that the train has broken down. Soon after another train pulls alongside us. The doors are opened and we all climb off, onto the tracks, with our luggage and board the relief train which takes us to Belgrade Center Station.

Now, one might imagine that Belgrade Center station might be in the centre of Belgrade but no such luck. It turns out that this is merely a suburban station some 5 kilometres from Belgrade, where some tricky apparatchik has decided to fool all the capitalist visitors by naming it Belgrade Center. Apparently, there is track work between Belgrade Center and Belgrade Central Station, so you can’t get between the two.

Moreover Belgrade Center station is devoid of any immediate public transport connections or even taxis and there is zero signage or information. So I and several fellow passengers mill around wondering how we get from here to Belgrade proper. Eventually we find an office and the staff, there, order a taxi for us. This signals the end of our journey and where I and another lost passenger share a taxi to downtown Belgrade.

As my AirBnB host says to me, sarcastically when I explain my delay “Welcome to Serbia”

Recent posts published on this blog:

The Iron Rule: thou shall not (easily) pass (at least not in Turkey or Bulgaria)

2 thoughts on “There’s a slow train a’coming driving me around the bend.”