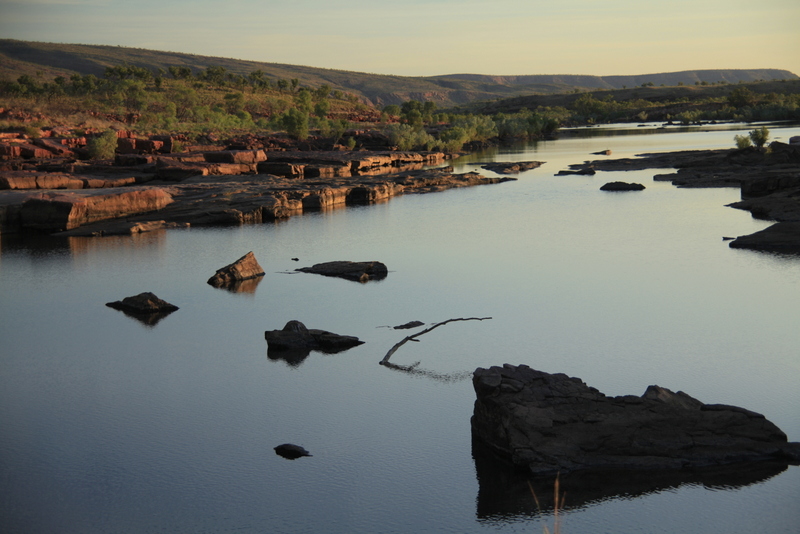 We depart Mornington after three nights. The atmosphere remains somewhat strained and tense after the morning of premature packing. Jill and Roger have indicated they will no longer sleep on the roof and will from now on put up their tent. Kaylee and I feel that this is just a dummy spit which will add to the packing time in the mornings. Where is Hillary Clinton when you need a bit of shuttle diplomacy? I consider launching cruise missiles at the tent but consider that this may lead to unrestrained playing of Abba which would be a fate worse than death.

On our way out of Mornington we stop to look for finches but despite lots of quiet waiting find none. So we press on. We are heading for a day at Bell Gorge which, we are told, is one of the Kimberley’s finest.

En route we stop off at the Imintji store for supplies. Imintji is a triumph of remote enterprise, encompassing as it does Aboriginal enterprise, good coffee, wifi, a well stocked store, friendly service. We can report good smoothies, scones that are so-so but heart shaped (so get an extra half a point from the romantics among us). and great milkshakes. We are giving it a five, Margaret.

At Imintji we run into our first motorcyclists. The two of them are both in their 60’s, are riding a BMW and Triumph and were last on the Gibb River Road in the late 1980s. They seem a little contemptuous of both the road and the drivers, the latter who don’t slow down. They recount tales of bull dust and pot holes and a maelstrom of abandoned trailers and caravans as drivers ambushed by corrugations as deep as the Grand Canyon and bulldust holes wider than the Sahara, abandon their trailers in a desperate attempts to escape the Gibb. The current Gibb is a tame beast in comparison. Our principal consultant has been riding bikes all his life and has more steel in his body than that in the Sydney Harbour Bridge. Fortunately he can still raise his arm high enough to get his beer to his lips.

Imintji also has a posse of Korean tourists who have turned up. There are about 15 of them in five nearly identical four wheel drives which as befits the children of one of the world’s most efficient economies are all neatly parked in a row, equidistant apart, all facing the same way and perfectly lined up with each other.

Arriving at Imintji has released a huge burst of oestrogen in Jill, Kaylee and, apparently, Roger all of whom indulge in a frenzy of child phoning. No child is safe from distant calls from errant parents all of whom appear to be suffering either from some form of 20+ years later baby craving or alternatively from a form of guilt due to having abandoned their babies for 2 months plus. By the time they have finished telephoning every available child and/or leaving 12 minute messages on their message bank beseeching them not to put petrol in their diesel, the queue for the only phone stretches around the shop.

We also receive good news. It is snowing heavily down south and well below zero in parts of Victoria. This radically increases our ability to gloat about our holidays. We all proceed to send images of ourselves sunning our bodies in warm gorges and lying on beaches at every available opportunity between here and Perth

We head over to the Aboriginal art centre and Kaylee indulges her need to buy a momento of every stop on this trip by investing in a painting by Edna Dale. I’m quite convinced that half the NT/WA economy has been supported for several weeks by Kaylee and Jill’s purchases.

Finally we leave Imintji and head off on the 45 minute drive to Bell Gorge campground. We had planned to have a simple dinner of jaffles tonight. The first time we had planned on this several days ago but in an extraordinary Un-Australian act, Nathan, the owner of the hire company has failed to supply jaffle irons in his vehicle. The desire to have jaffles disappears however when we discover that cost of jaffle irons at the Imintji store is about the same as a buying a new cooktop. We do, however, invest in a camp toaster to use on the gas stove.

We are camping the night at Silent Grove campground about 10 kilometres from Bell Gorge. About 2 hours after setting up camp the tour group, ‘AMOS’ arrived. In theory the area for tour groups was at the entrance to the camp ground but AMOS apparently felt they had a God given right to ignore signs that had clearly been placed for ordinary mortals.

When we eventually found that AMOS stood for Australian Mission Outreach Service, our first choice seemed a suitable alternative name.

Because Bell is 10 kilometres from the camp ground we need to drive to the Gorge. Roger takes this as an opportunity re-locate the concrete fire pit near our vehicle. It becomes clear later he feels the need to improve his tyre changing skills since this no doubt leads our next puncture.

Our visit to Bell was hugely improved by the presence of a film crew and the members of a Four wheel club with their eight sponsored vehicles. When we first arrived at Bell Gorge itself there were just seven people there, by the time we left there were close to 60 including two tour groups, and the 20 odd drivers and crew of the club, plus camera crew and accompanying drone operator who proceeded to buzz the gorge with his drone and camera for about an hour. There are many parts of the eastern Sydney suburbs, such as Waverley Cemetery, that are invariably infinitely more peaceful and tranquil than Bell Gorge during our visit.

Bell is certainly a beautiful gorge and you can get away from the crowds by following the creek up or down river through a series of pools and ledges. It is certainly suffering however from its reputation as one of the more spectacular Kimberley Gorges (it’s really no more so than many others) and its relatively easy access via an easy 30 minute walk.

After a brief hour at Bell we decide to leave the crowd to its own devices and we head back for a quiet afternoon in the camp. The ground has filled up and among our fellow campers are the motor cyclists from Imintji and five other motorcyclists on bikes with side cars. As with many other of our fellow travellers we are to see them several more times.

Our nearest campers (aside from the nest of a pair of double barred finches) are a young couple from Melbourne who have been on the road for eighteen months. She left straight from school and he is a plumber which allows him to work everywhere they go. We frighten them with tales of the giant potholes on the Gibb and other lies, which they deserved for having bacon and eggs for breakfast while we were engaging in muesli delight.

In the morning we prepare to set off for Windjana Gorge but before we go Kaylee must indulge in a bit more camper-rig envy. We have encountered our other neighbours previously at Mornington but Kaylee had not seen their rig. However she now realises she has missed a major opportunity to indulge in camper fantasy.

Kaylee is a little inclined to psychological attachments to moving objects and can often be found in her house bent over watching the washing machine going round and round for hours at a time (note to P12 students â€“ this may explain why the marking sometimes doesn’t get done). This apparently puts her into some form of trance in which she can find relaxation.

She also loves little boxes and on shopping trips has to be restrained from buying cabinets with dozens of little drawers. So the adjacent camper is like the orgasmatron of previous mention. It not only has a mechanical camper awning that Kaylee could spend her mornings raising and lowering but an entire perspex-fronted kitchen section with about 40 little drawers and slots for various spices and other cooking bits and pieces. Kaylee is beside herself with excitement.

2 thoughts on “Beating About the Bush, 60 Days in Northern Australia (Part 17- Bell Gorge)”