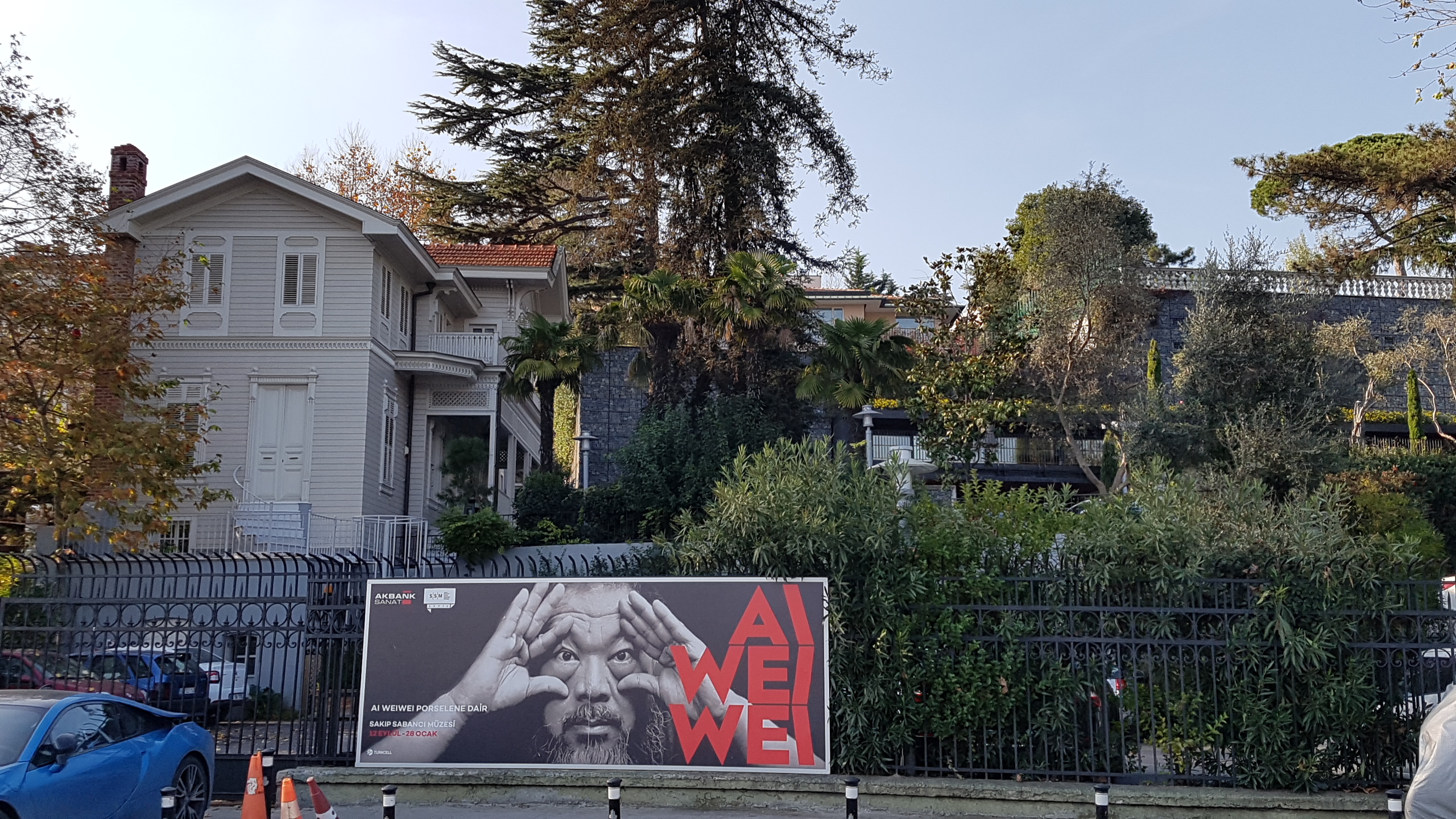 “Life is art, art is life, I never separate them.” Ai Weiwei (AWW)….and everything is political. 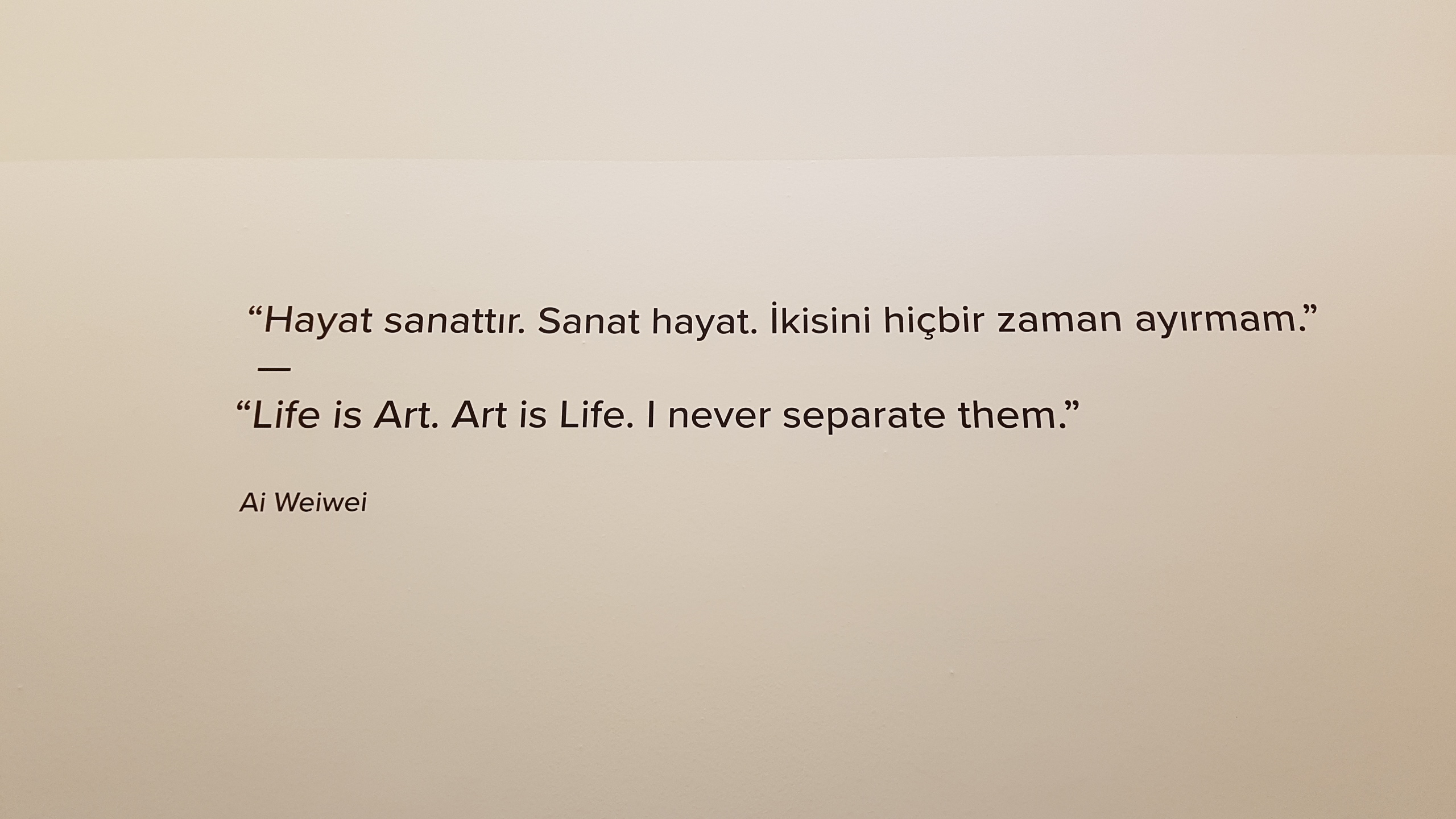 If you take the view that I do, which is that even drawing breath is a political act, then Ai Weiwei’s exhibition, in Istanbul, is a great expression of the philosophy that Art is Life and that everything in life is political.

I slipped, almost literally, through the front door on a rainy, slippery, Istanbul day. For a cultural illiterate, such as I, who normally can’t tell the difference between Mahler and Wagner or between a Rembrandt and a Vermeer and who thinks a Concerto is a brand of Honda car, an Ai Wei Wei exhibition is perfect.

Vases as columns against a backdrop of scenes depicting refugees, emigrants, prisoners and other similar groups

Much of the exhibition utilises common place objects as a link between the everyday and the political and cultural. A coat hanger is used as the basis for a portrait and car window winders are used to demonstrate the absurdity of totalitarianism, which attempted to prevent protests from moving vehicles, while driving through Tiananmen Square, by removing all the window winders from cars.

Between 2008 and 2011 Ai Weiwei became the subject of political persecution by the Chinese Government, a process that began after his investigations of and blogging about political corruption. In this case corruption that had allowed shoddily built buildings to kill tens of thousands of people during the Sichuan earthquakes in May 2008. The dead included 5000 schoolchildren killed by poorly-built schools throughout the region. AWW named each of the dead children.

There are echoes of history in his subsequent detention. His father, the famous Chinese poet, Ai Qing, who was exiled to the Gobi Desert, said in 1946: “I believe that art and the revolution must go together; they can never be separated. We are political animals, and sometimes we write as political animals. If the revolution fails, the art will fail, but in as far as is possible the artist must be a revolutionary. As a revolutionary and as an artist he must represent his times.

Ai responded to the deaths in Sichuan with a series of angry blog posts, and by the next year had set up the Citizens’ Investigation on Sichuan earthquake. The police responded by making a threatening visit Ai’s home, and a few months later, when Ai was in Sichuan to attend the trial of an earthquake activist, police broke into his hotel during the night and beat him. He was left with a cerebral hemorrhage and required emergency brain surgery.

A part of the exhibition uses the beating and the brain scans, that led to surgery, as as the basis for two ceramics using a scan of his brain.

It was during this period that AWW was arrested, as he was boarding a flight to Taiwan, and then detained for 81 days. Subsequently he was barred from overseas travel and the studio he had been invited to build was torn down by the Chinese Government.

In literally 24 hours, the entire building was demolished, razed to the ground and the rubble trucked away so that not one shred of evidence of the buildings existence remains – a sort of instant re-writing of history (at left, below, the building before demolition and then the paddock shown after the building’s removal at right, below). AWW documents the process in a video.

From here the exhibition moves on to document a series of images of AWW’s response to authority, in a very simply and symbolic series of images of iconic buildings which in some form or other represent wealth, power or images of a society’s culture…such as, in the case of Australia the opera house. In each AWW stands with finger raised as we all wish to do to authority figures, much of the time.

Similarly he uses images, such as those of massed crabs, to document mechanisms of secret protest against authoritarian regimes. Chinese people use the word for the crabs as a synonym for censorship as it sounds similar to the Chinese word for “harmonious” and refers directly to Chinese attempts to create a harmonious society via censorship.

Following AWW’s arrest and detention he was put under house arrest and then had his passport removed so he could not travel abroad, specifically, in the beginning, to prevent him receiving his nobel prize. His resistance to the removal of his travel rights is documented in a series of images of flowers (perhaps resonant of the famous 1967 images of George Harris and Jan Rose Kasmir using flowers in the face of the rifle barrels of National Guardsman.

Over a period of 600 days Ai Weiwei placed flowers in the basket of his bicycle to protest against the loss of his passport. His use of flowers as a symbol of protest is repeated in a number of works in the exhibition and the centrepiece (centre, below) is a wall-papered room showing each of the bunches of flowers that were placed in the bicycle basket.

The rest of the exhibition follows similar themes using a variety of artistic mechanisms to document his views on Palestine through his videos of the last tiger, starving in Palestine’s zoo following the Israeli blockade (the tiger was later saved), and documenting the treatment of refugees and other groups around the world (bottom images).